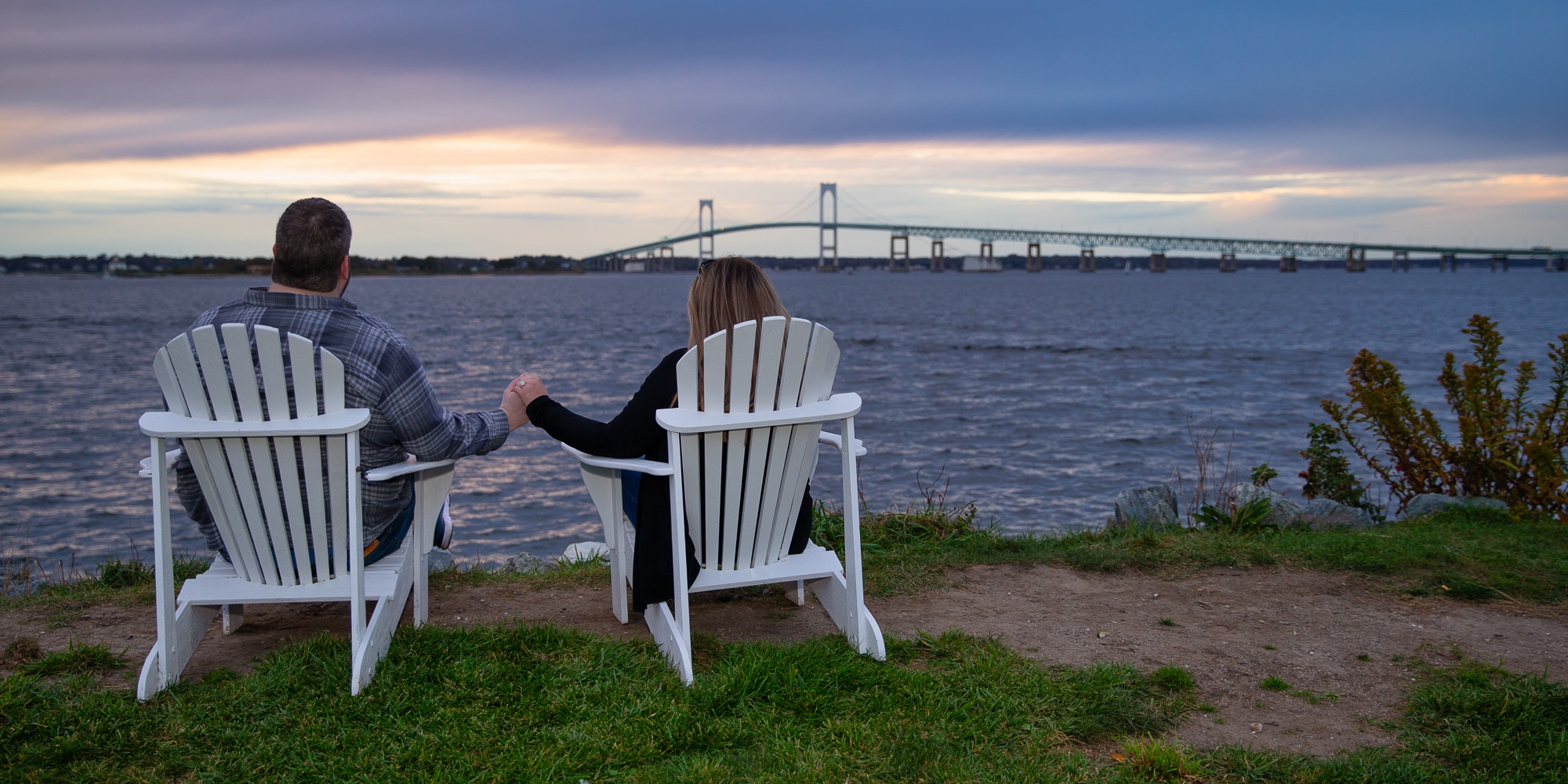 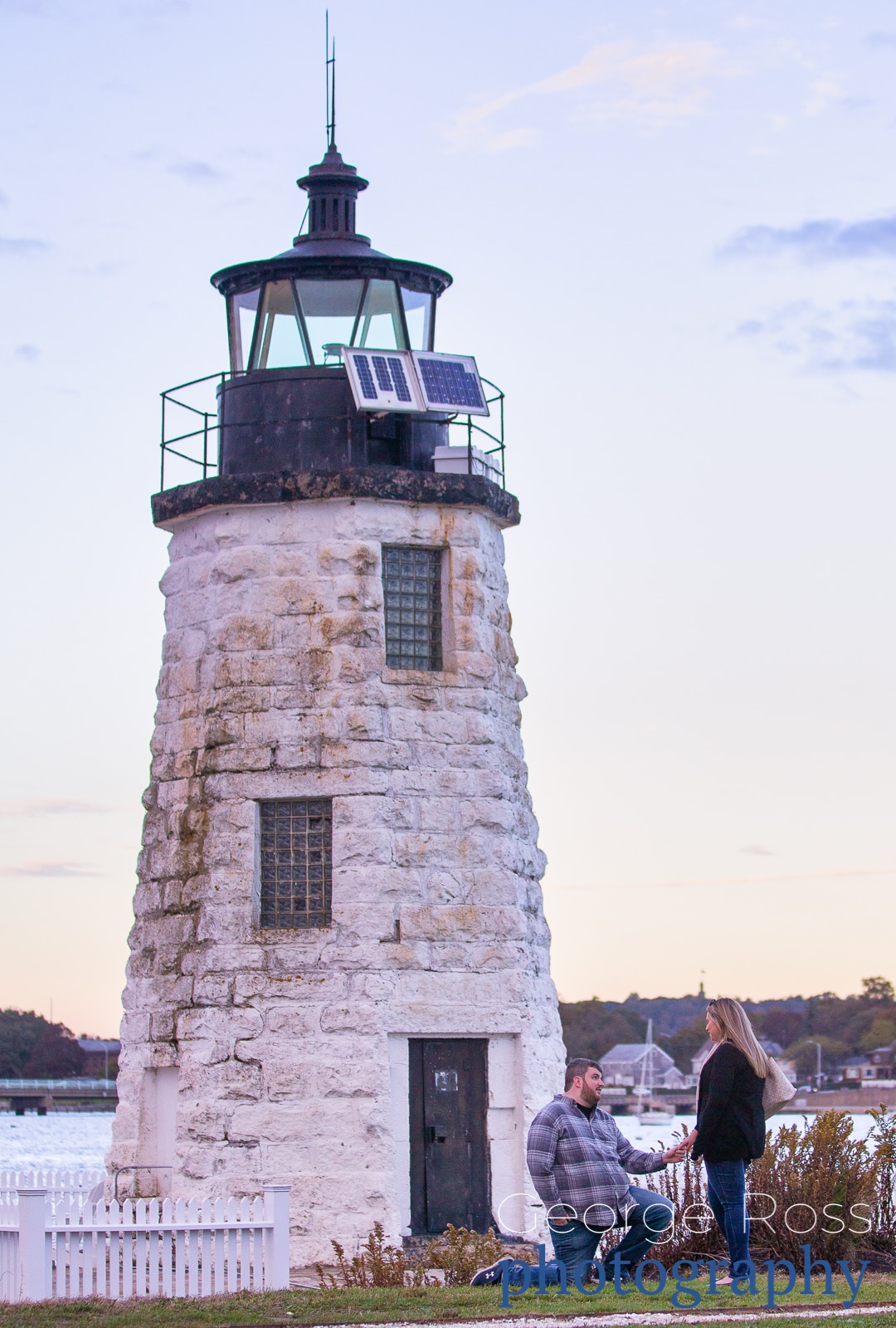 Where to Propose In Rhode Island?

Like many of my surprise proposal clients, Corey was from out-of-state and sought guidance on a suitable location for his proposal to Jessica. His initial thinking was to propose on the Cliff Walk, at a lighthouse or a vineyard. When we spoke on the phone, we discussed the pros and cons of each location and selected the Goat Island Lighthouse. Corey could tell Jessica they had a reservation at Gurney’s and would take a pleasant walk to the Lighthouse before dinner, perfect!

Corey made a reservation for 6 pm; we had a game plan.

Being a Saturday evening, my wife opted to join me on the shoot, after which we would go to dinner. Great, because she would give me  cover, we would be just another couple enjoying Goat Island; and not a sole photographer in hiding.

On the day of the proposal, Mags and I left home at 4:00 pm and sent a text to Corey with my eta of 4:30 pm. I always plan on arriving 30 mins before the scheduled shoot.

When we arrived at the light, my heart stopped – there was a wedding just about to begin. Oh, shoot! This ruled the Lighthouse out of bounds. I texted Corey to inform him we would be using plan ‘B’ unless the wedding ceremony was over when he arrived, at which point we could use the Lighthouse. I felt terrible for Corey because he had never been here before, and here I was calling an audible.

I took a photo with my iPhone, annotated it to show him the desired spot, and texted it. It was a beautiful spot with Narragansett Bay and the Newport Bridge in the background. Corey would love Plan ‘B,’ he just had to find it. A Ford F150 was marking the spot in the photo that I sent him, but then the unthinkable happened, the truck moved. Oh, shoot!

I had to think quickly! I asked Mags to stand in the spot and to stay there until Corey and Jessica got close. Corey had sent me photos of them earlier, and I was confident that I ( and Mags) could easily recognize them. I sent Corey a photo of Mags in location and told him of our plan via text.

Then, as if on cue, the wedding finished. Then the 100+ wedding guests and the wedding party slowly walked in front of Mags and Plan ‘B.’ Oh, shoot! 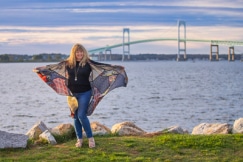 As the last wedding guests walked past the chosen spot, Corey and Jessica arrived, and Mags vacated the location. I had taken a couple of test shots and put my camera in a bag to hide it, and I was ready to go. Mags came over and stood beside me, which allowed me to be close and not raise suspicion. We were just a couple hanging out. Then Corey called an audible; he noticed that the wedding was over and Plan ‘A’ was back in play. Oh, shoot!

When the couple arrived at the designated spot, I prepared my camera for a second time. I took a couple of test shots and adjusted the exposure for the fading light. And then, they walked right past the spot and onto the Lighthouse. Oh, shoot!

Was Corey going to propose on the Lighthouse, behind the white picket fence, where I would have limited visibility or somewhere else? I could see Corey pull his phone from his pocket as Jessica was taking in the scenery, and he was texting. Corey sent me a text to let me know Plan ‘A’ was going to happen. I waited, and then after 5 minutes Corey and Jessica began to walk…to Plan ‘A,’ excellent! I was ready, and for the 3rd time, I prepared my camera. The couple stopped walking and began to talk, I hid my camera behind a tree, and we watched. Then Corey dropped to his knee and proposed, at last!

Jessica was overcome with emotion and joy; she was so happy.

At the end of our mini-engagement shoot, we walked back to Plan ‘B’ where I photographed Corey and Jessica holding hands looking at the Newport Bridge.

Plan ‘B’ had a purpose after all. 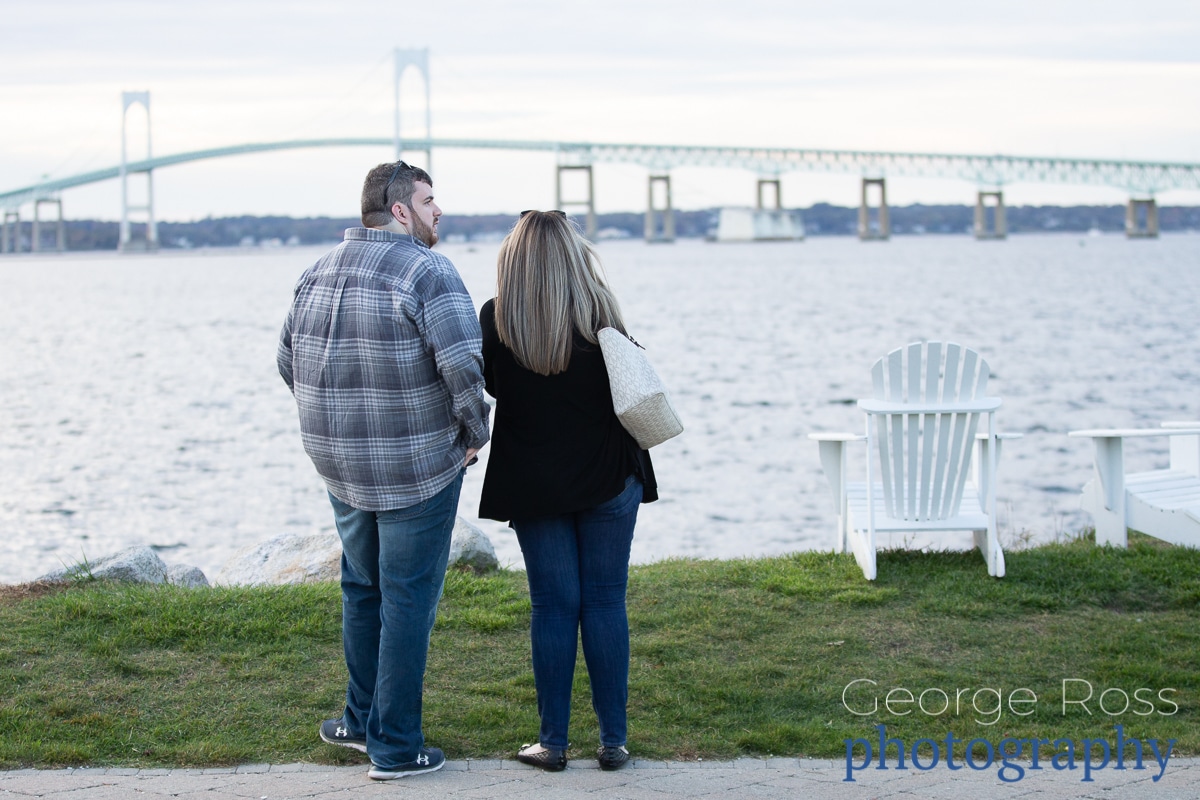 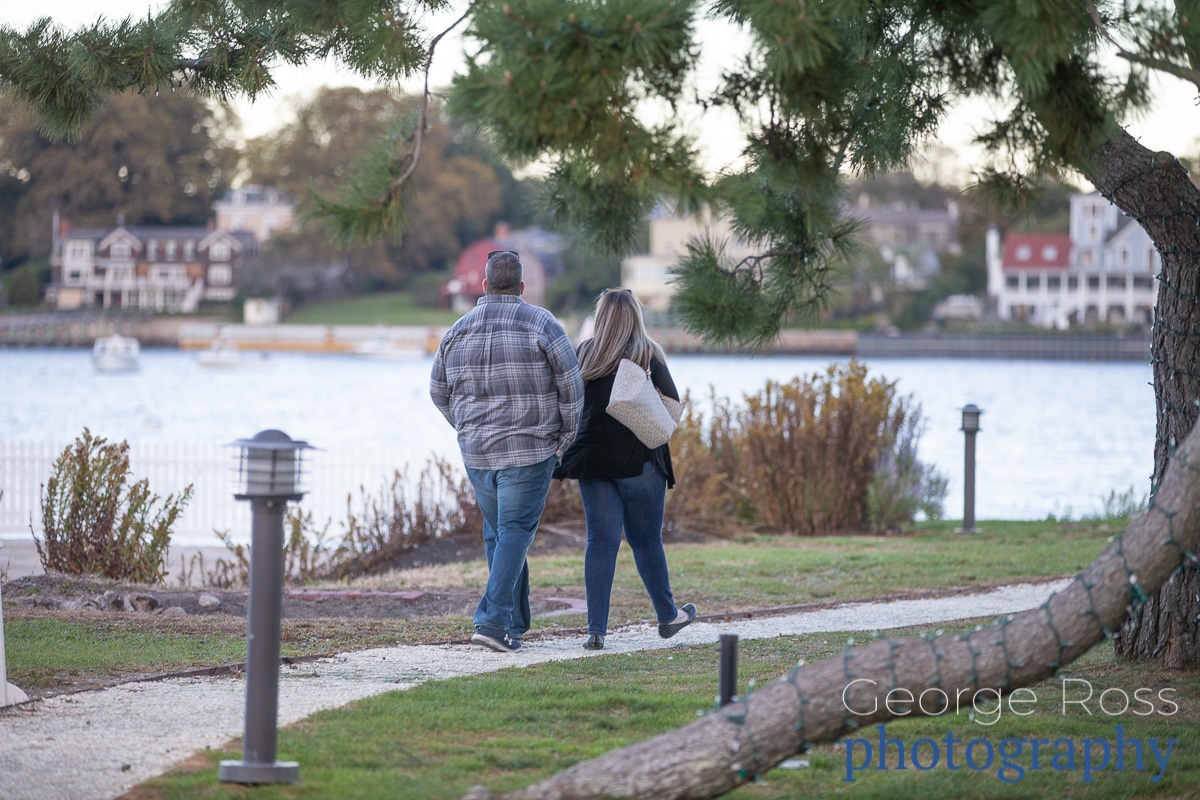 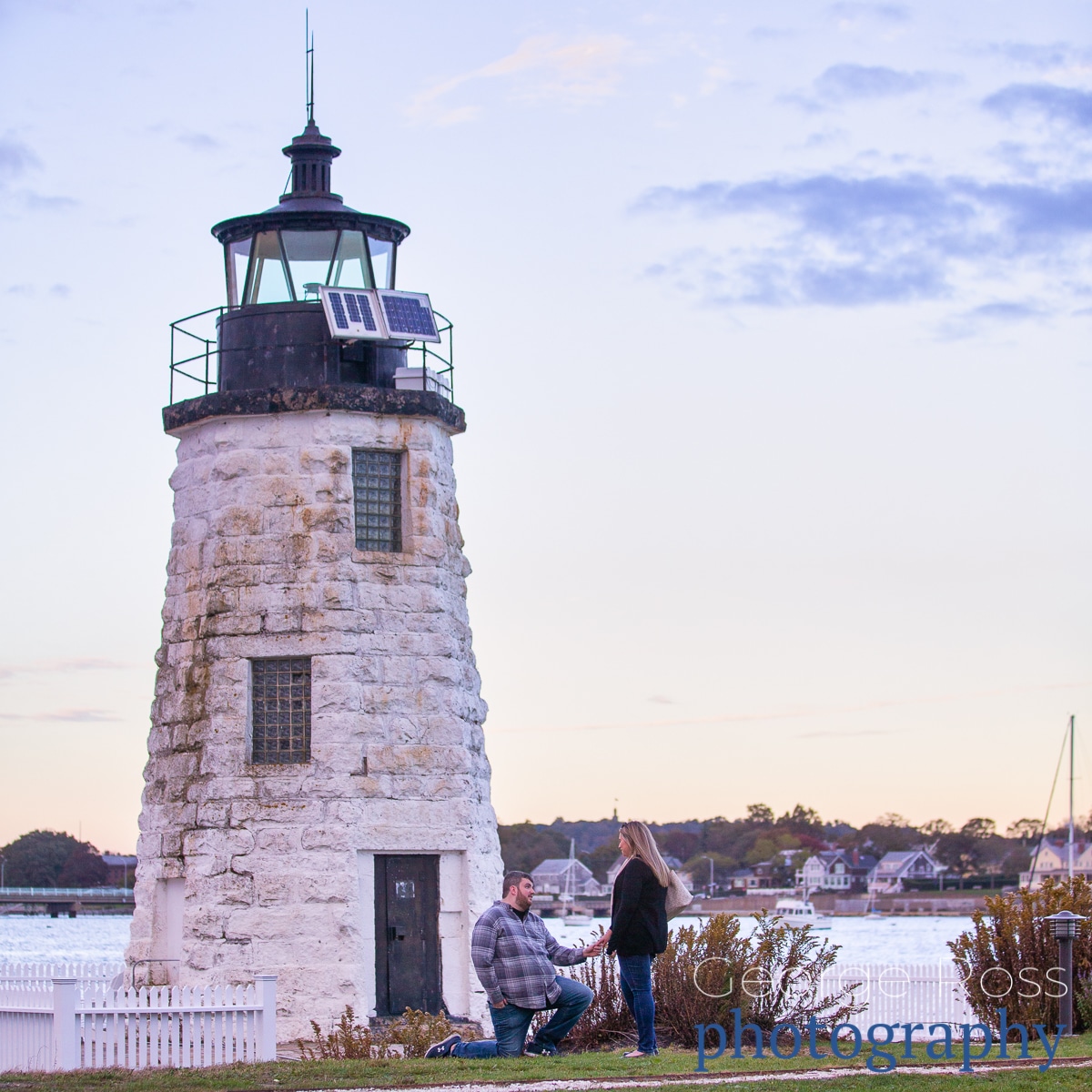 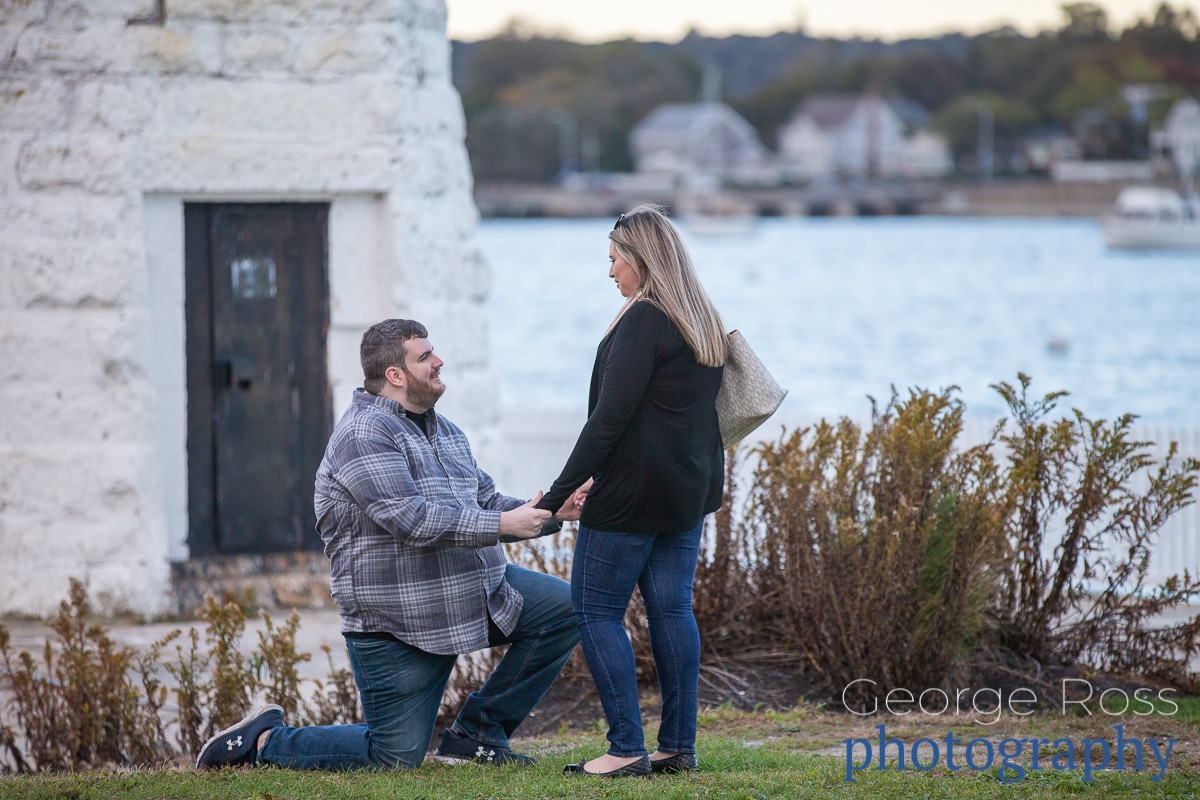 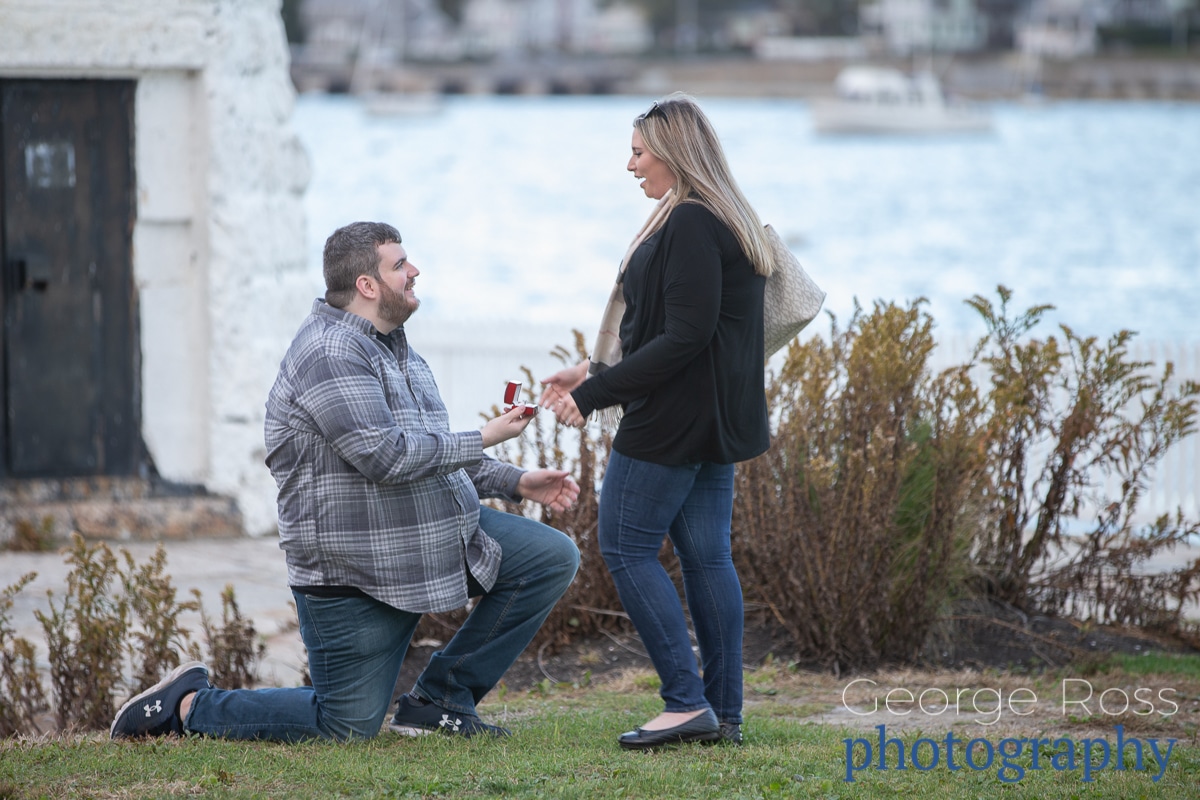 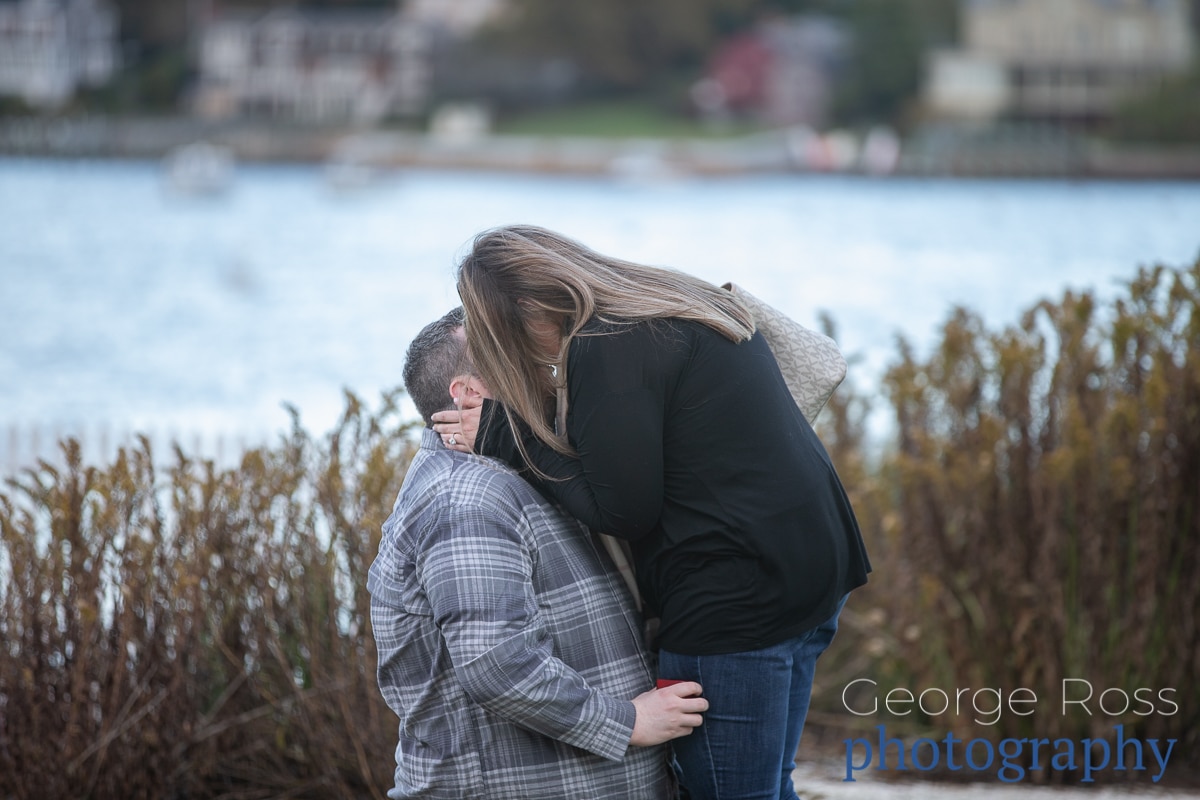 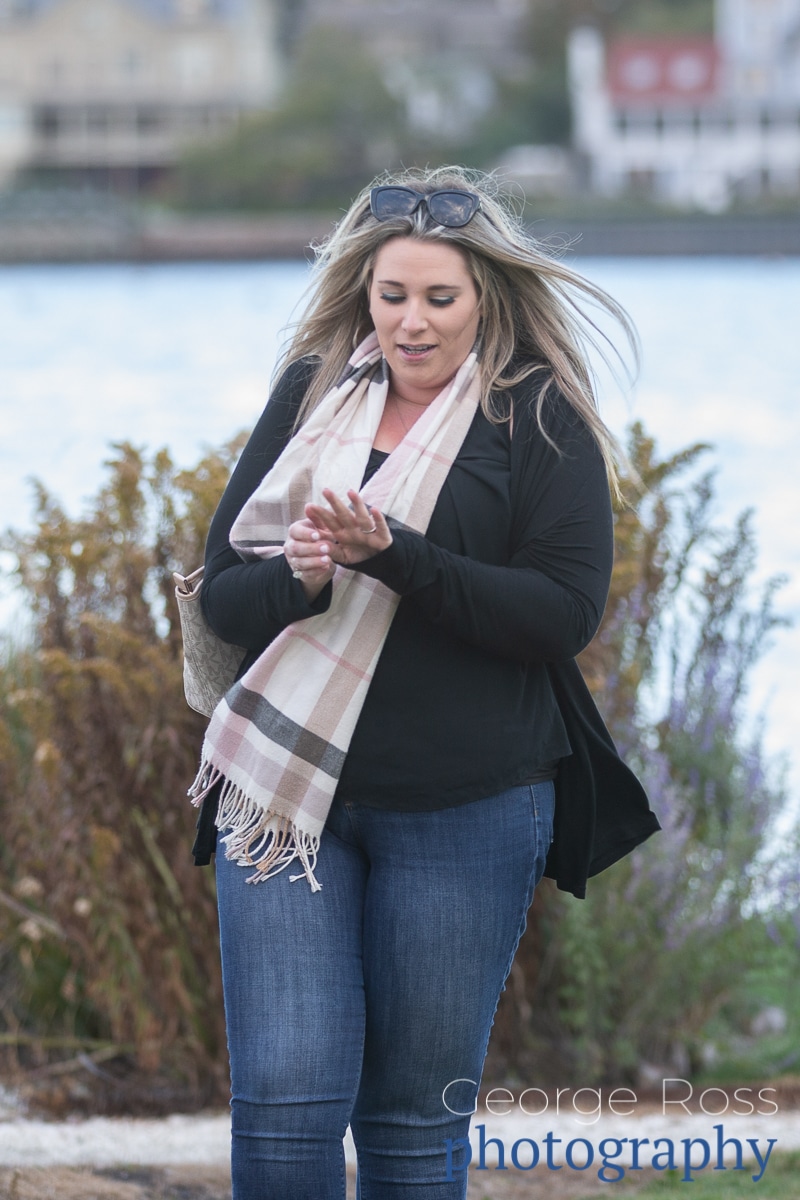 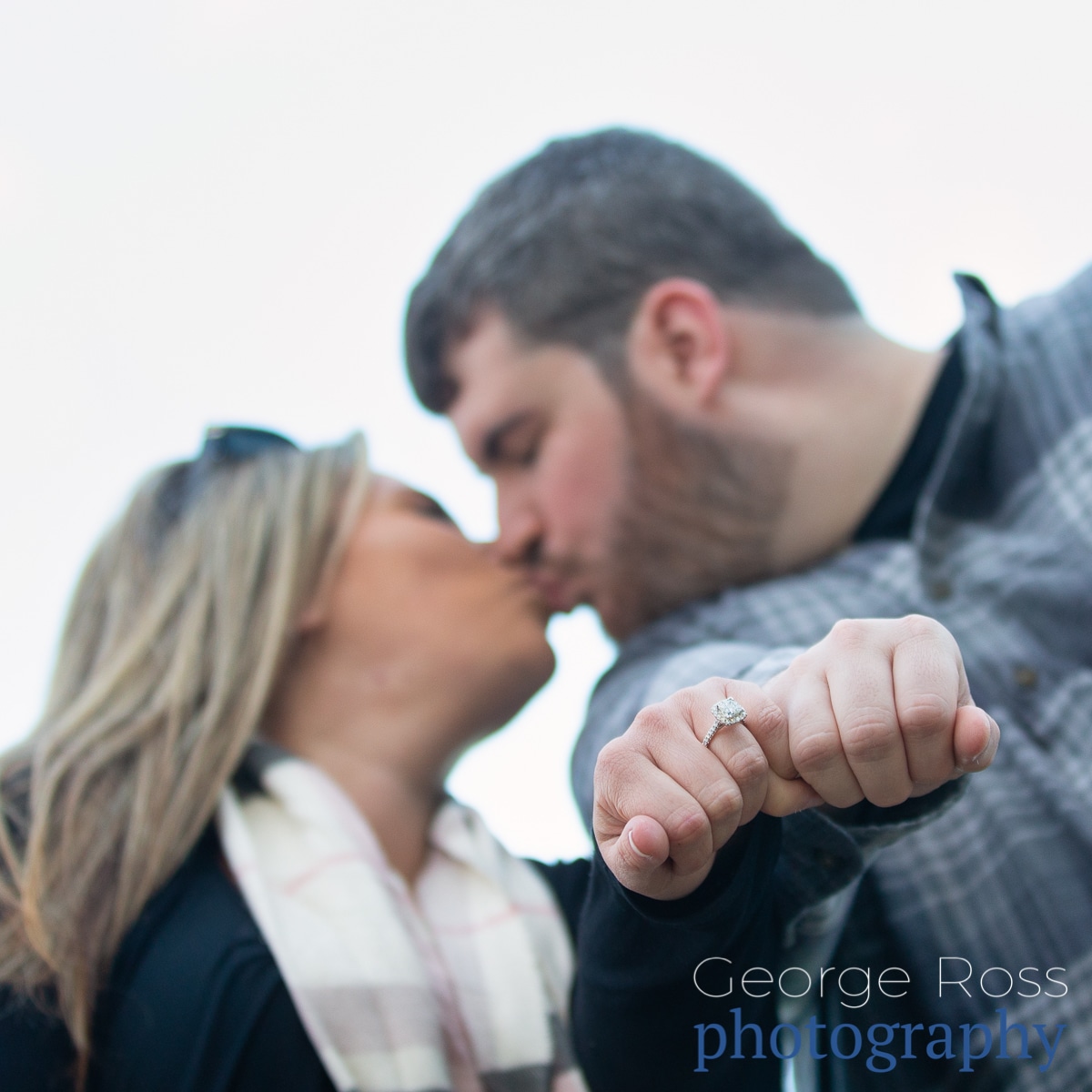 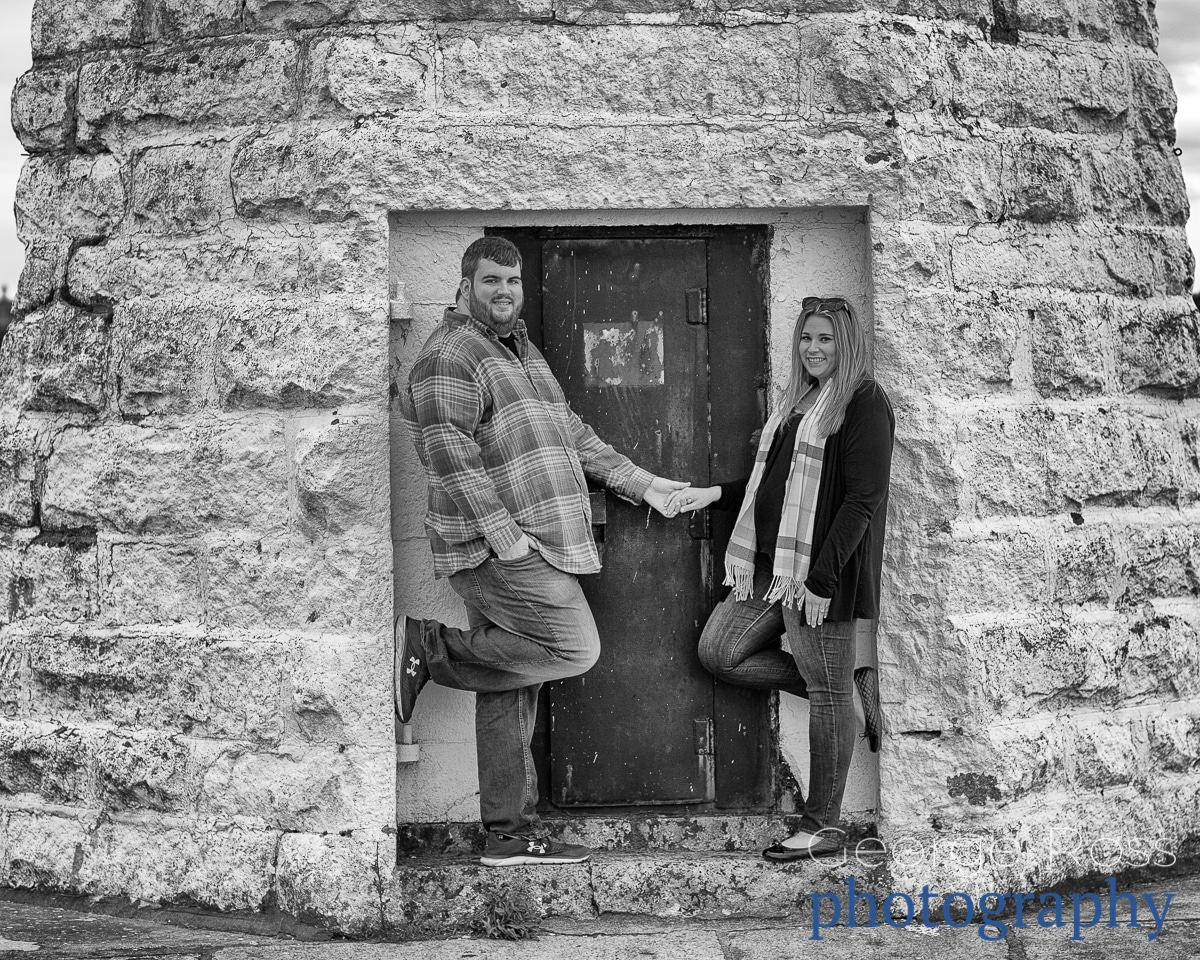 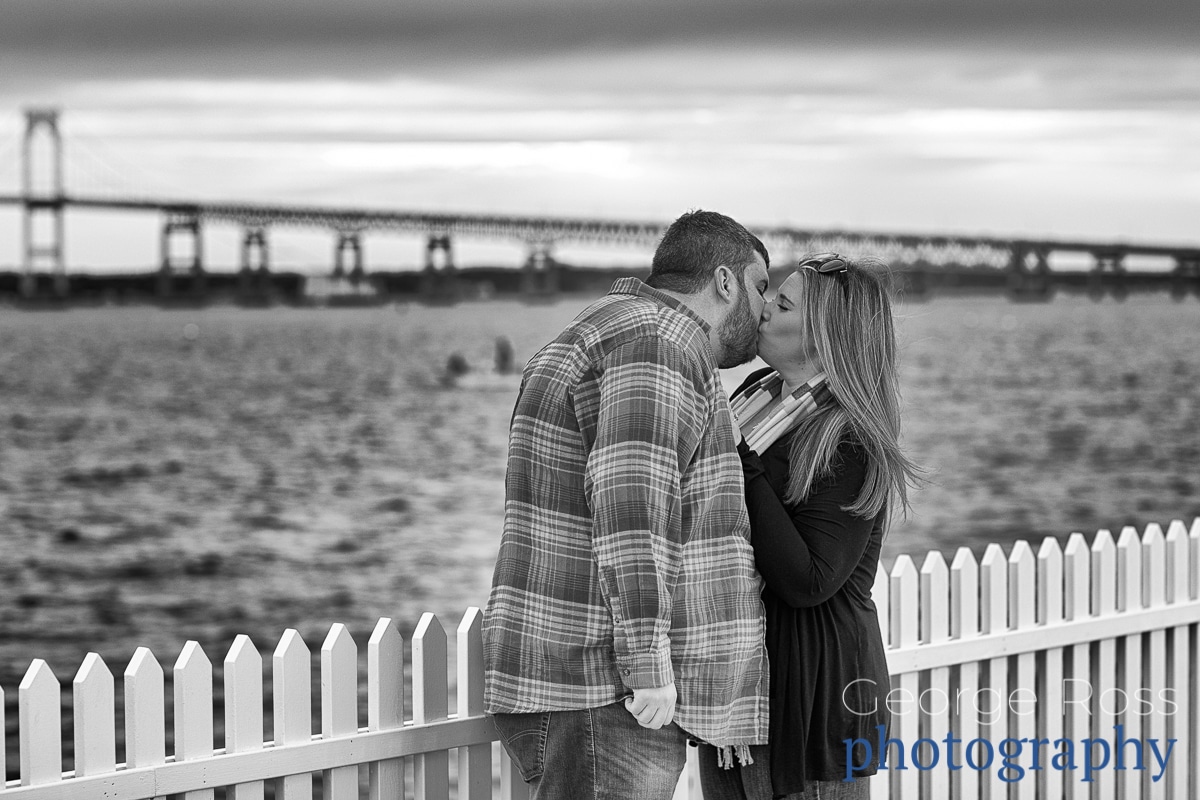 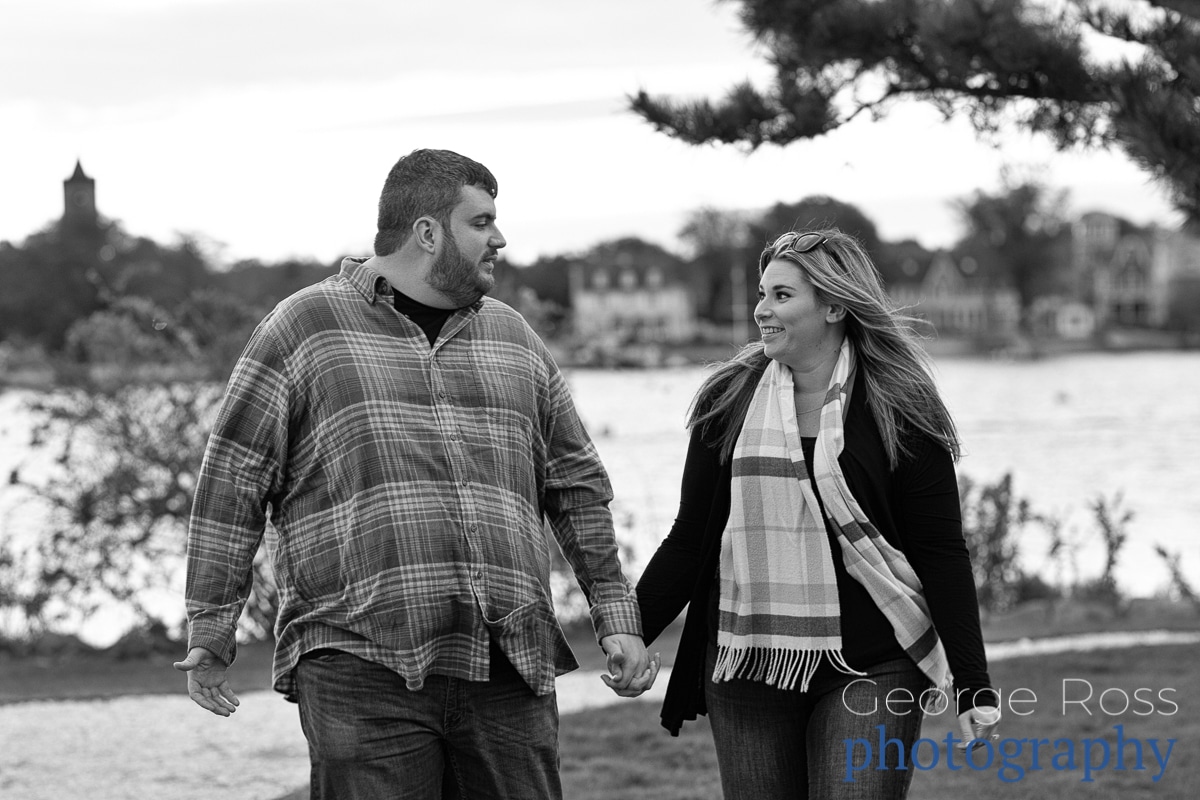 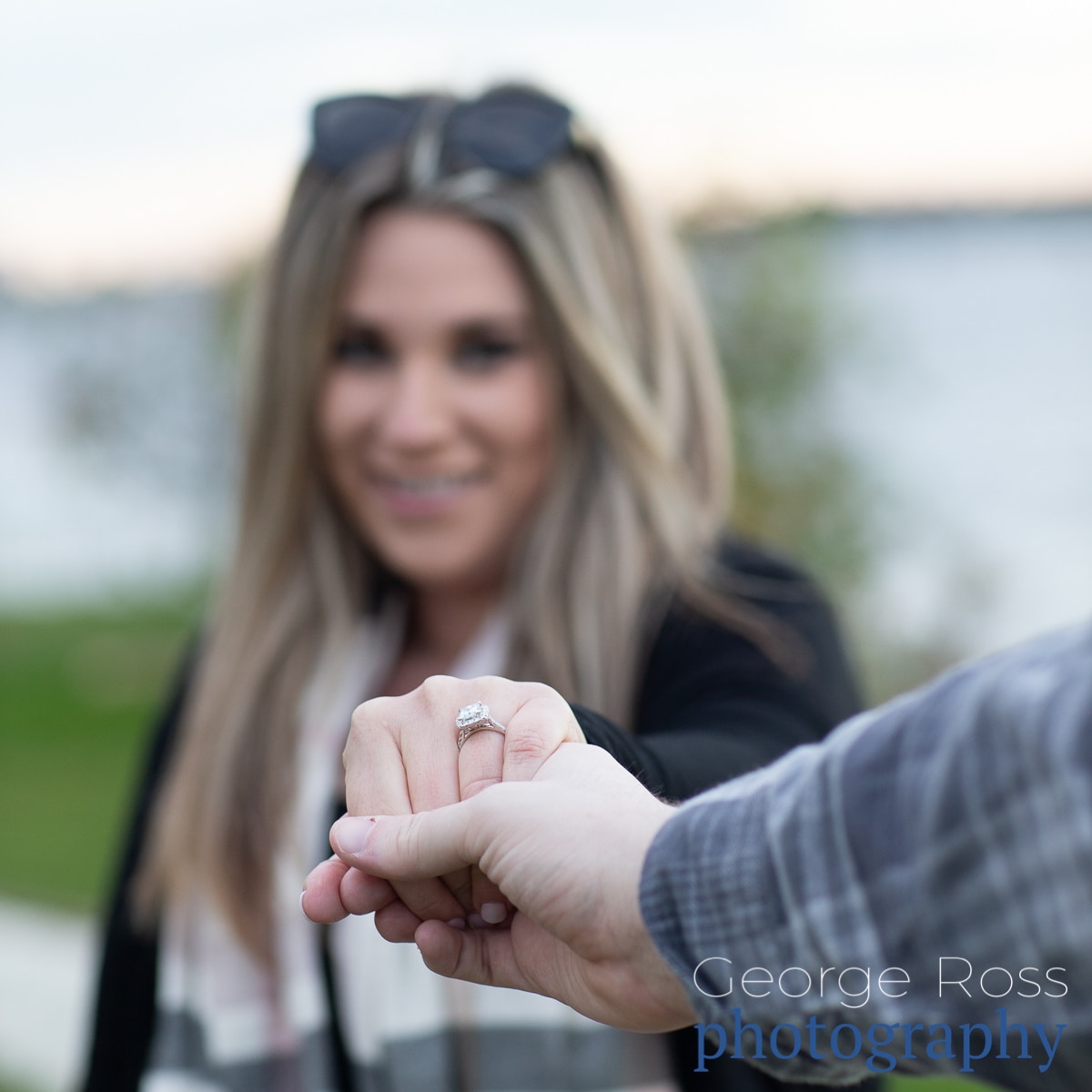 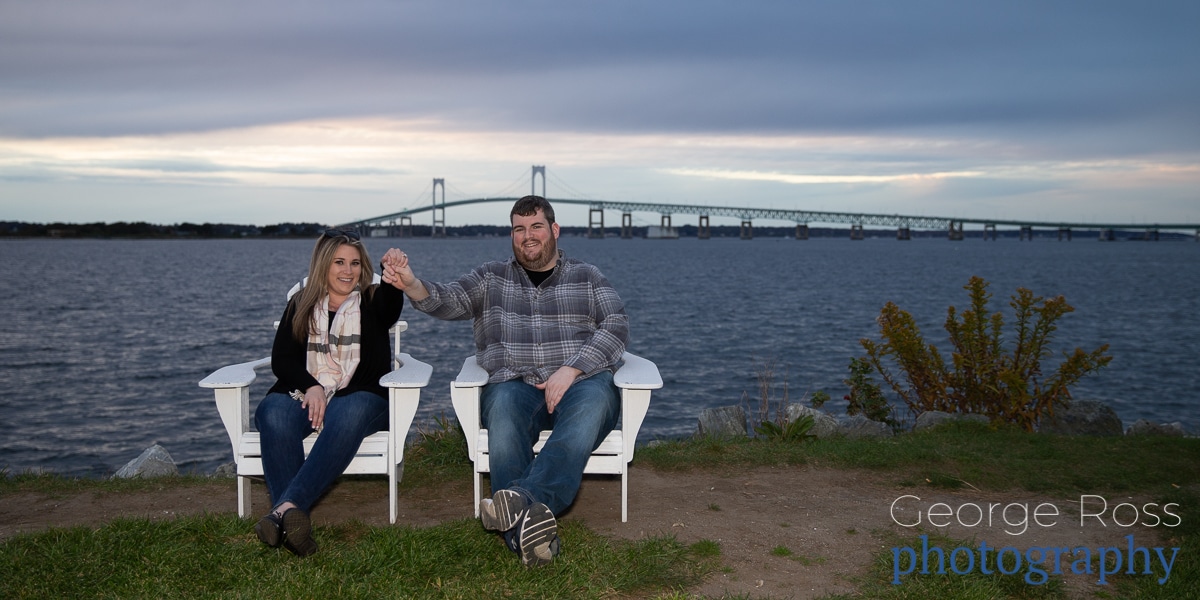