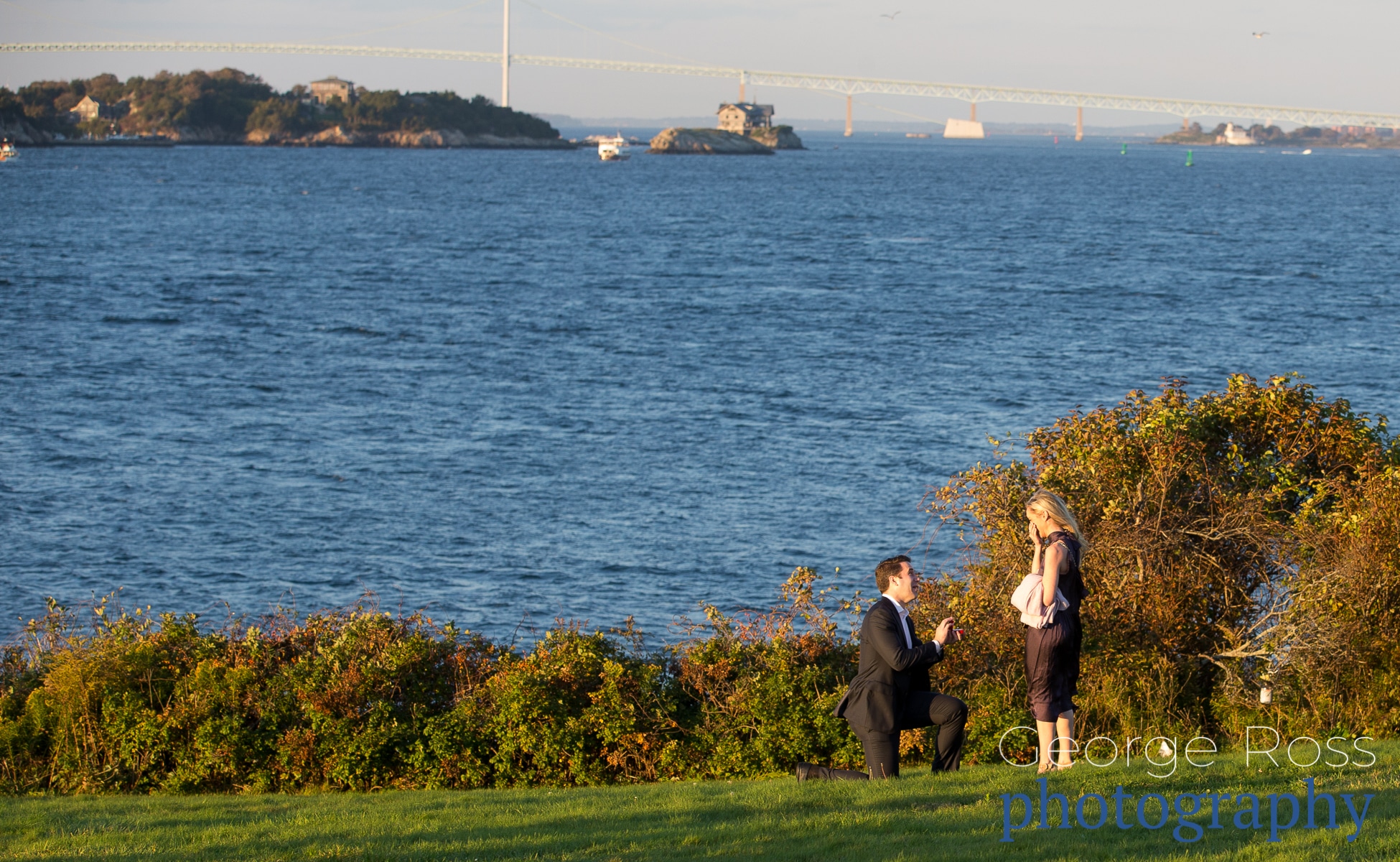 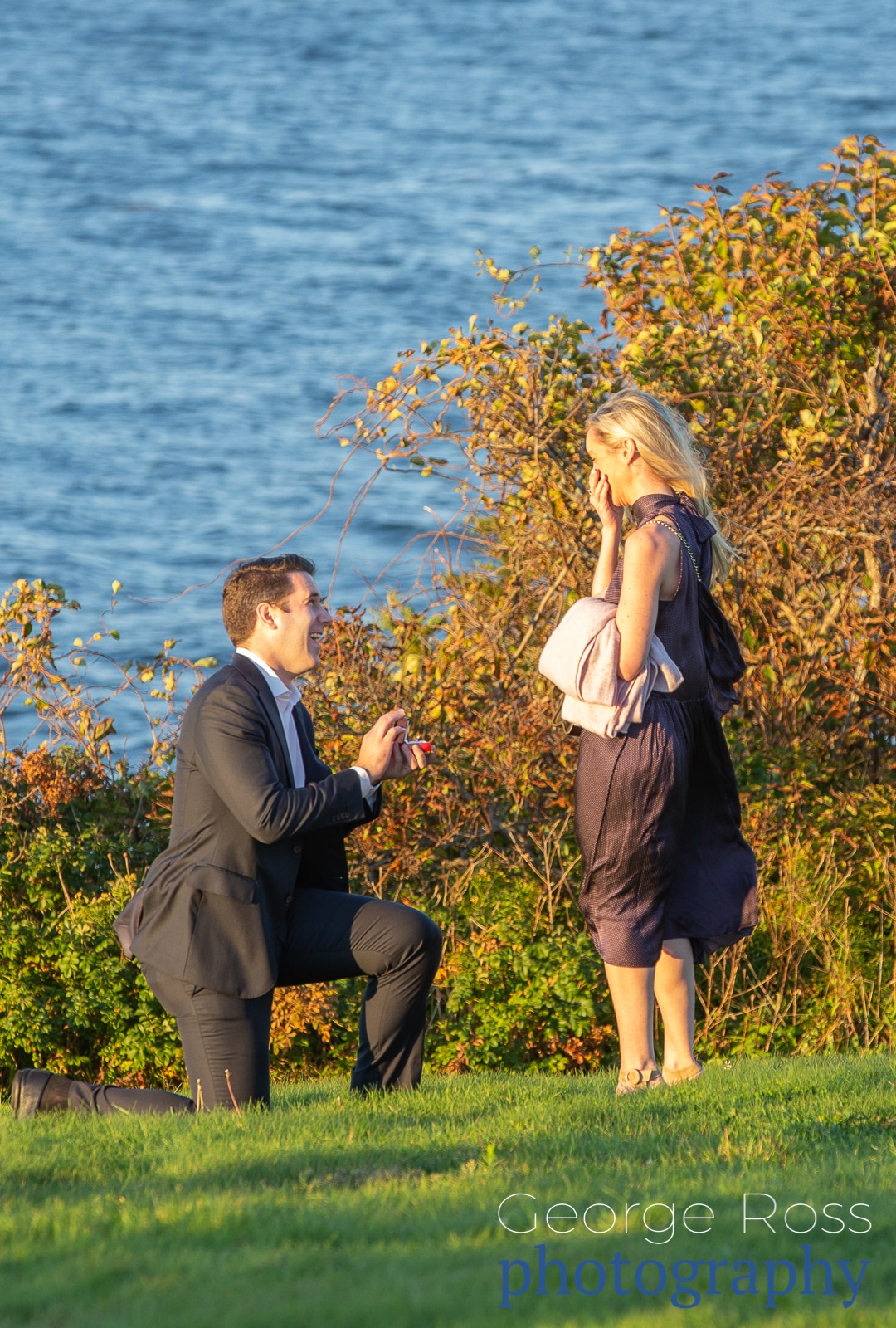 Where to Propose In Rhode Island?

It is more unusual than expected, but Rob’s surprise proposal to Erin on the lawn at The Castle Hill Inn, Newport, RI, pretty much went without a hitch, not 100% but pretty close. Having photographed a few proposals at The Castle Hill Inn, I knew the lie of the land and any potential obstacles that we may face, well, most of them because they call them surprises for a good reason!

With its white Adirondack chairs, the famed sloped-lawn has a magnificent view of Narraganset Bay and Newport’s Pell Bridge. Sailboats would populate the bay in the summertime, but there should still be some boats: a scattering of recreational fishing boats in late October chasing the last of the Bluefish and Striped Bass.

We spoke on the phone one week before the proposal and hatched out a plan, and I also introduced the idea of using the Castle Hill Lighthouse. Rob was excited at the prospect of using the lighthouse as a backdrop.

Rob and I planned on meeting 30 minutes before Erin’s arrival, which would give me time to show Rob the lighthouse. Perfect!

I pulled into valet parking, self-parked, and grabbed my backpack, which contained a second camera body, second strobe, and additional lenses. I am a great believer in dual-redundancy because there are no do-overs. I picked up my sports bag to hide my primary camera fitted with a canon 70mm- 200mm L series f/2.8 lens and a Canon 580EX strobe equipped with a Gary Fong diffuser.

I met up with Rob, and we strolled through the lawn, which was packed with guests enjoying a wonderful late fall day from their Adirondack chairs. I took Rob to the spot by the shoreline edge of the property with the Newport Bridge as a backdrop. I coached Rob on the ideal location for the proposal to take full advantage of the background. With the breeze coming out of the west, I asked that Rob position Erin be east on the right-hand side of Rob to ensure that the ocean wind would blow her hair behind her face and not across it. Also, I asked Rob to be cognizant of him casting a shadow over Erin, and we both laughed at this because we knew he had other things to be thinking about, but it is always worth planting a seed. After scouting the proposal spot, we took a walk to the Castle Hill lighthouse, and I showed Rob a few beautiful places we could use for post-proposal photos, after which we returned to the inn. We were ready. 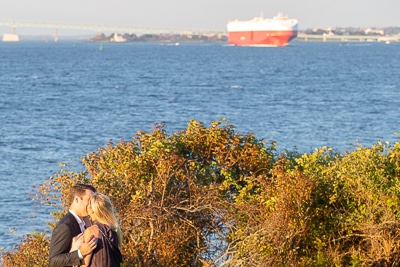 I sat in the outdoor bar area and kept a watching eye for Rob and Erin; I took a couple of test shots and tucked my camera back in its hiding place. I saw Rob first, at which point I pulled out my cell phone and pretended to look at it while watching them out of the side of my eye. As they passed me, I picked up my bag walked to a point on the lawn that would give me the best shot, close to a family group sitting in the Adirondack chairs. I told them what was going to happen, and I asked if I could hang out with them for a minute. They were delighted to be enrolled in the action. However, the folks were getting excited about watching Rob and Erin and kept asking me to pull out my camera to be ready. I explained that this was not my first rodeo, but still, they were concerned that I would not have my camera out in time. As the discussion was being ‘whispered,’ I saw Rob drop to his knee; I pulled out my camera to capture the proposal against a spectacular backdrop.

However, there was one tiny issue at the time of the proposal a huge red cargo ship came into view. I had to change the angle of my shots as best as I could to cut out the boat. It was almost perfect!

After the proposal, everyone in the Adirondack chairs broke into a loud cheer.

It was a magical moment. 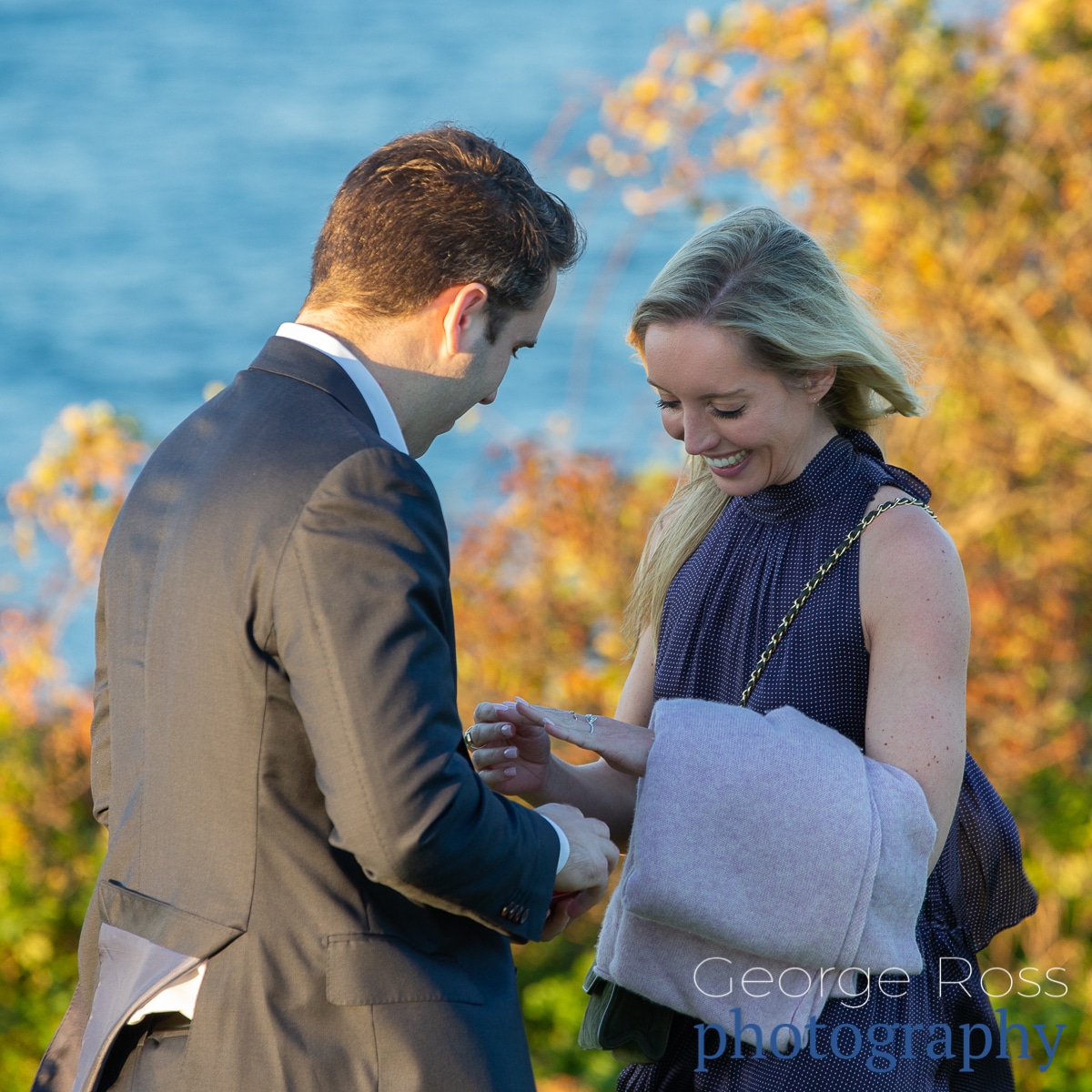 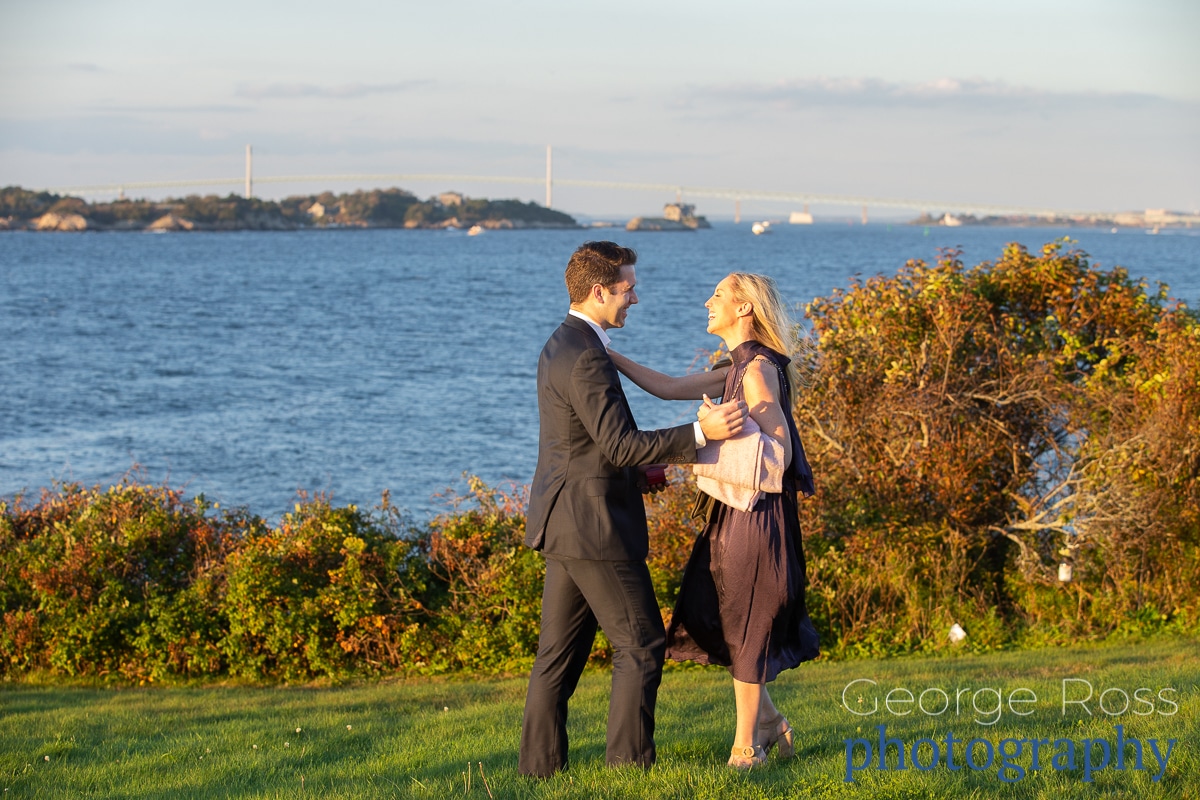 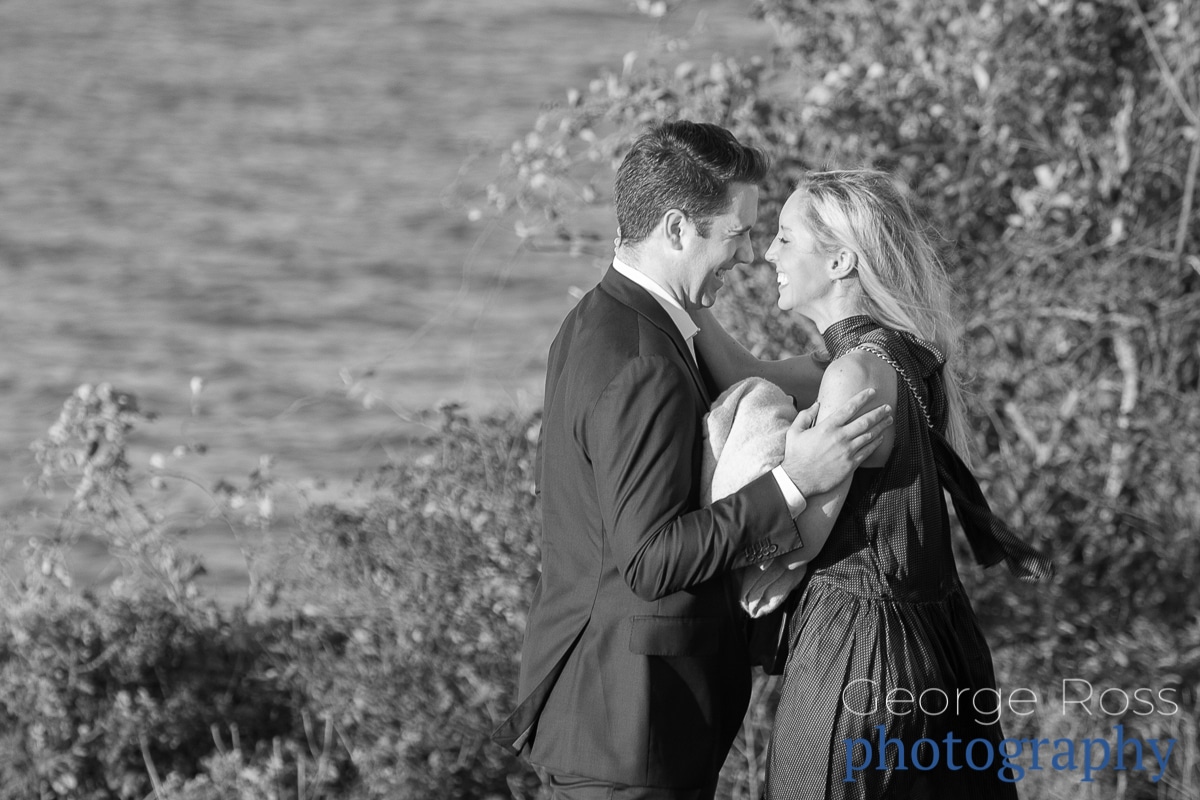 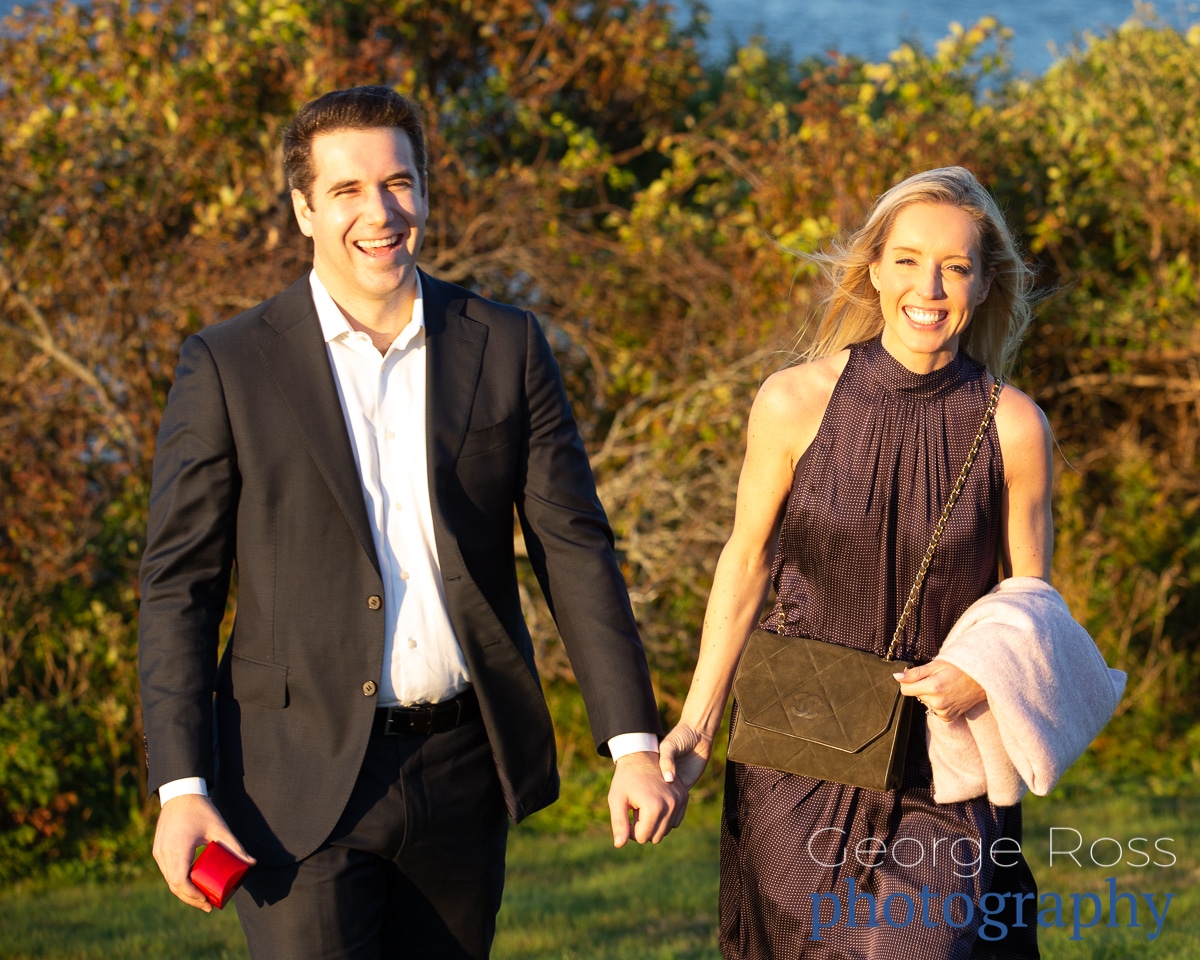 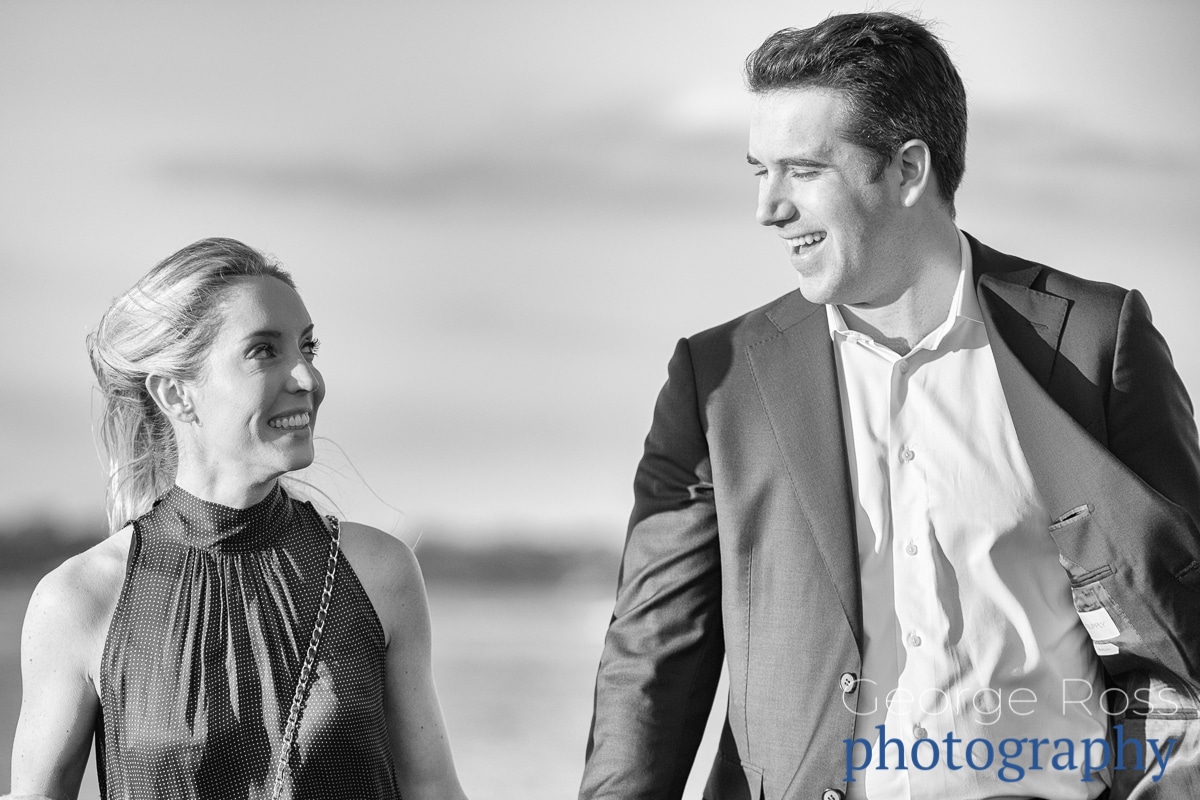 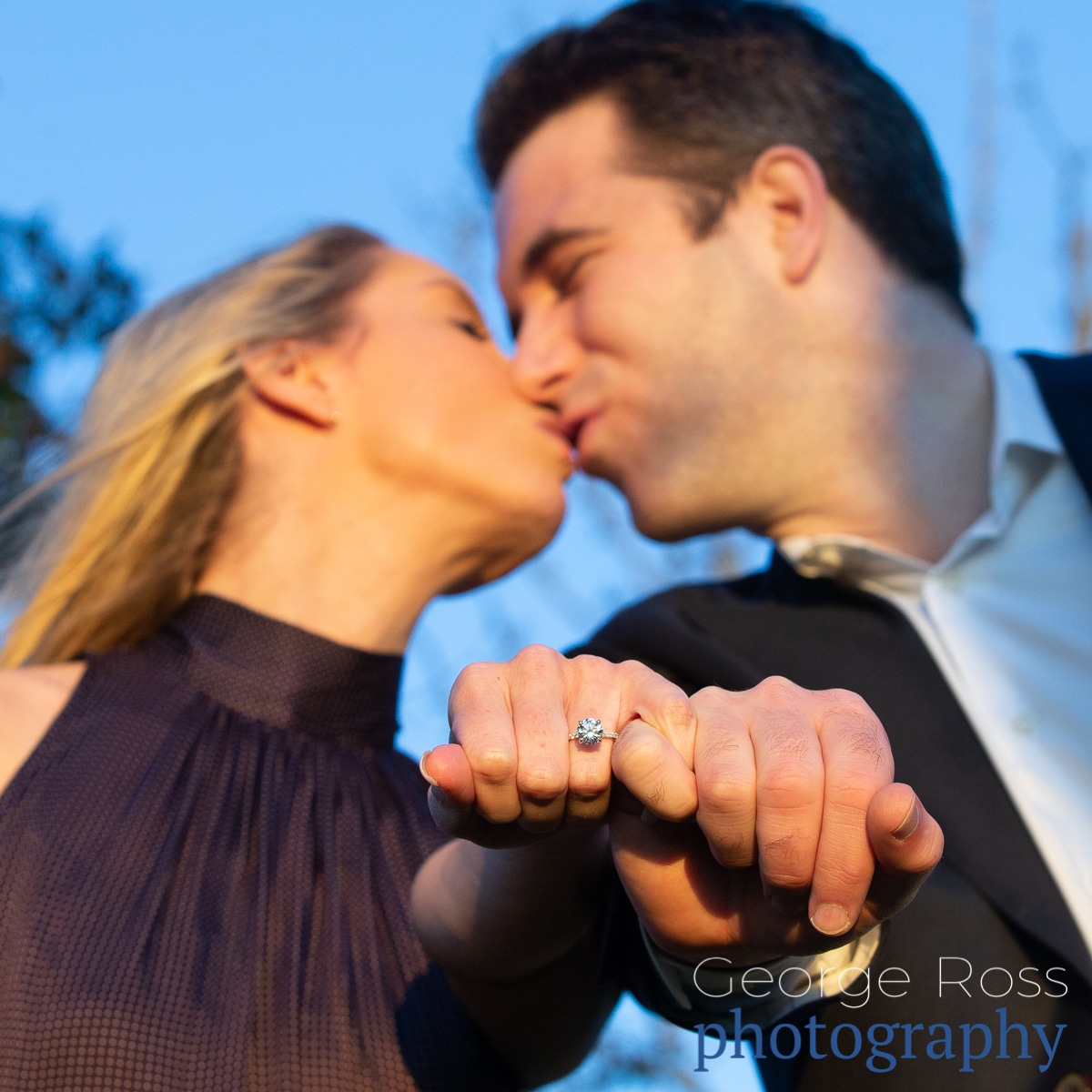 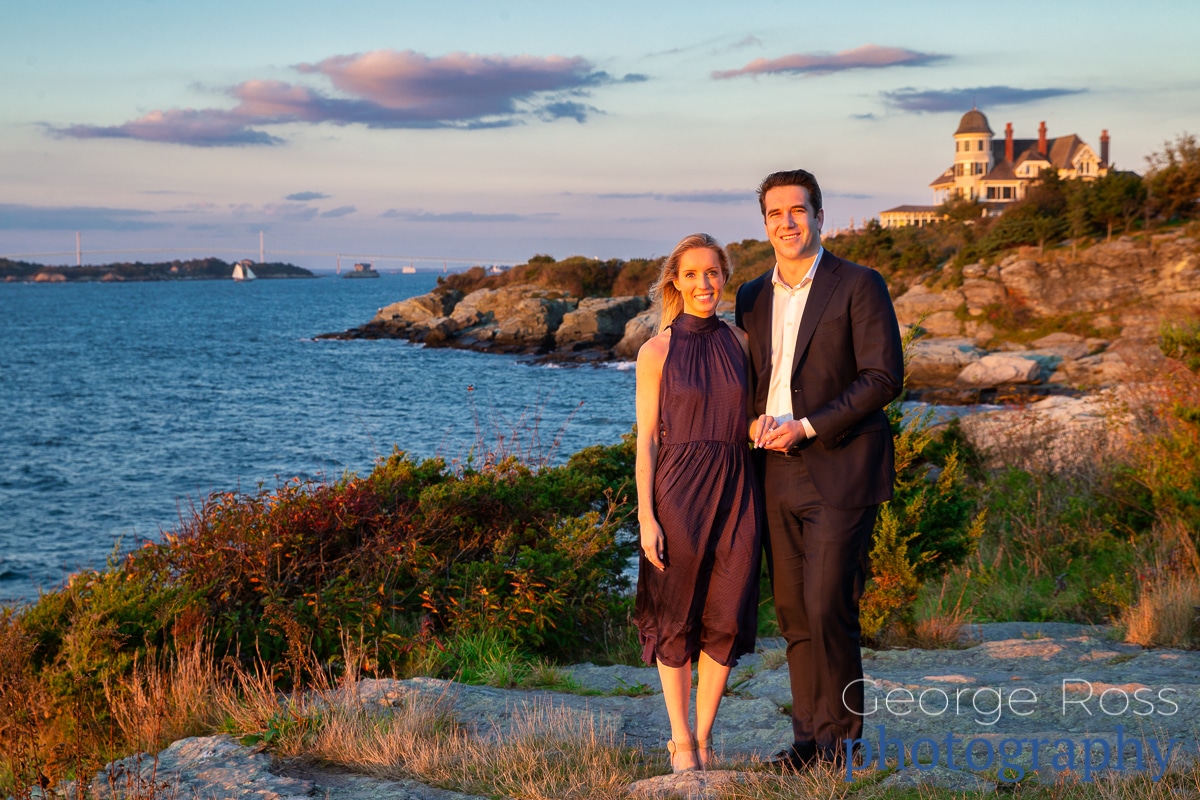 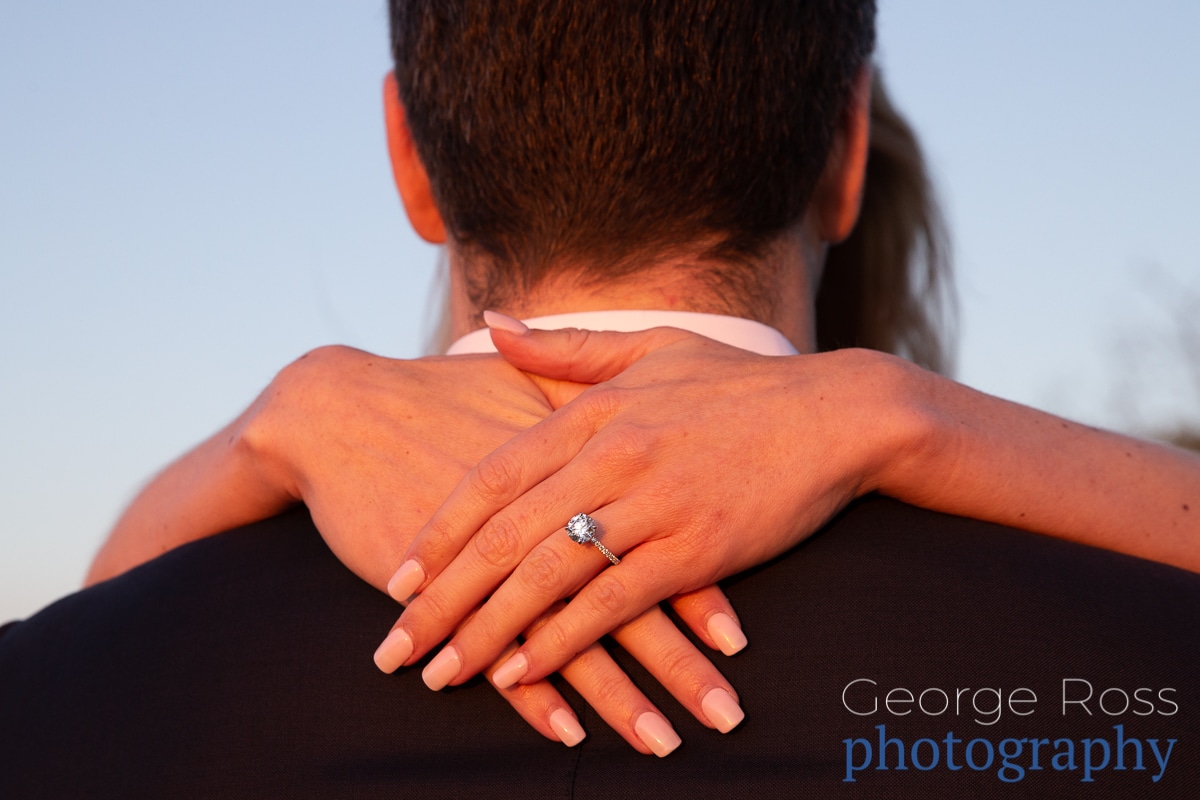 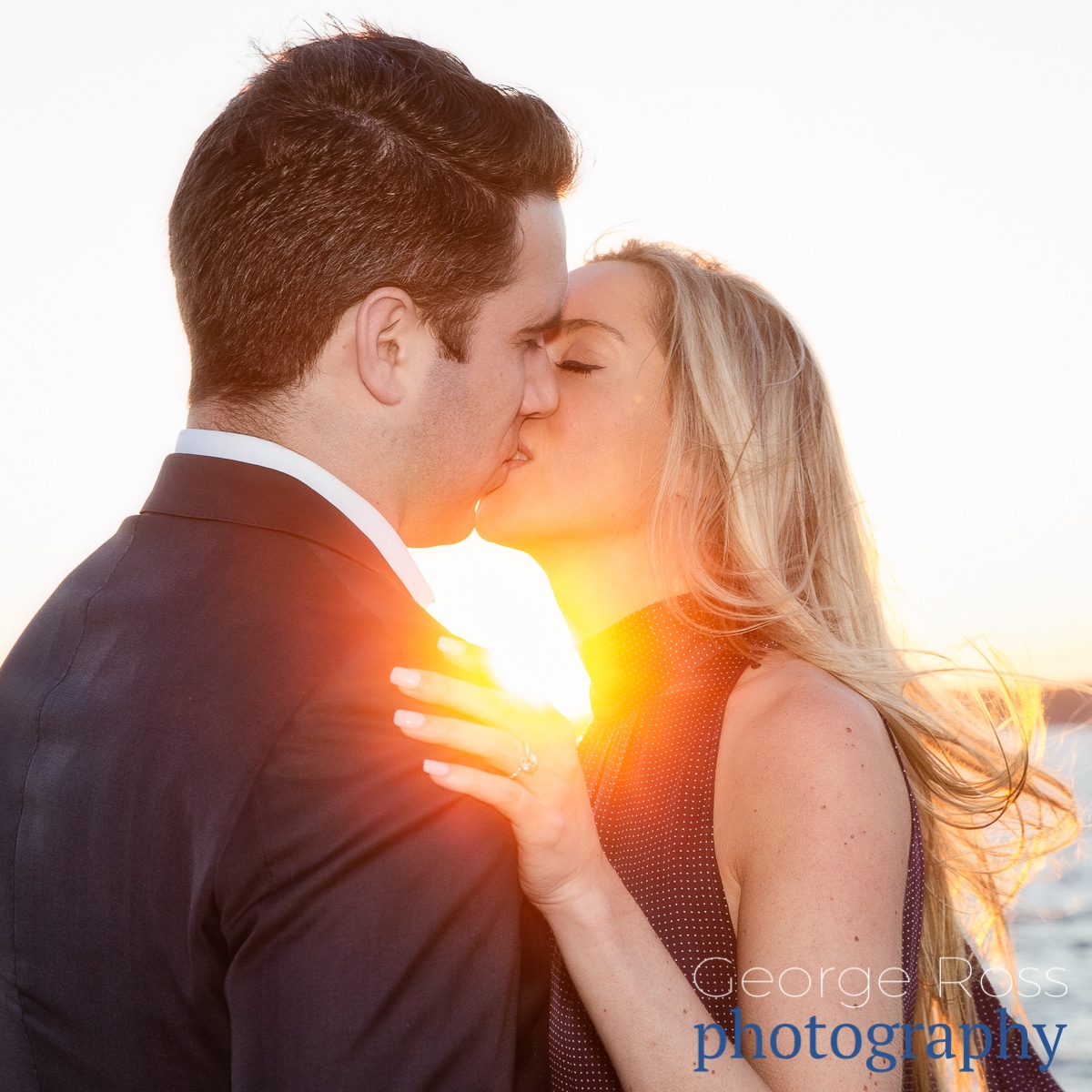 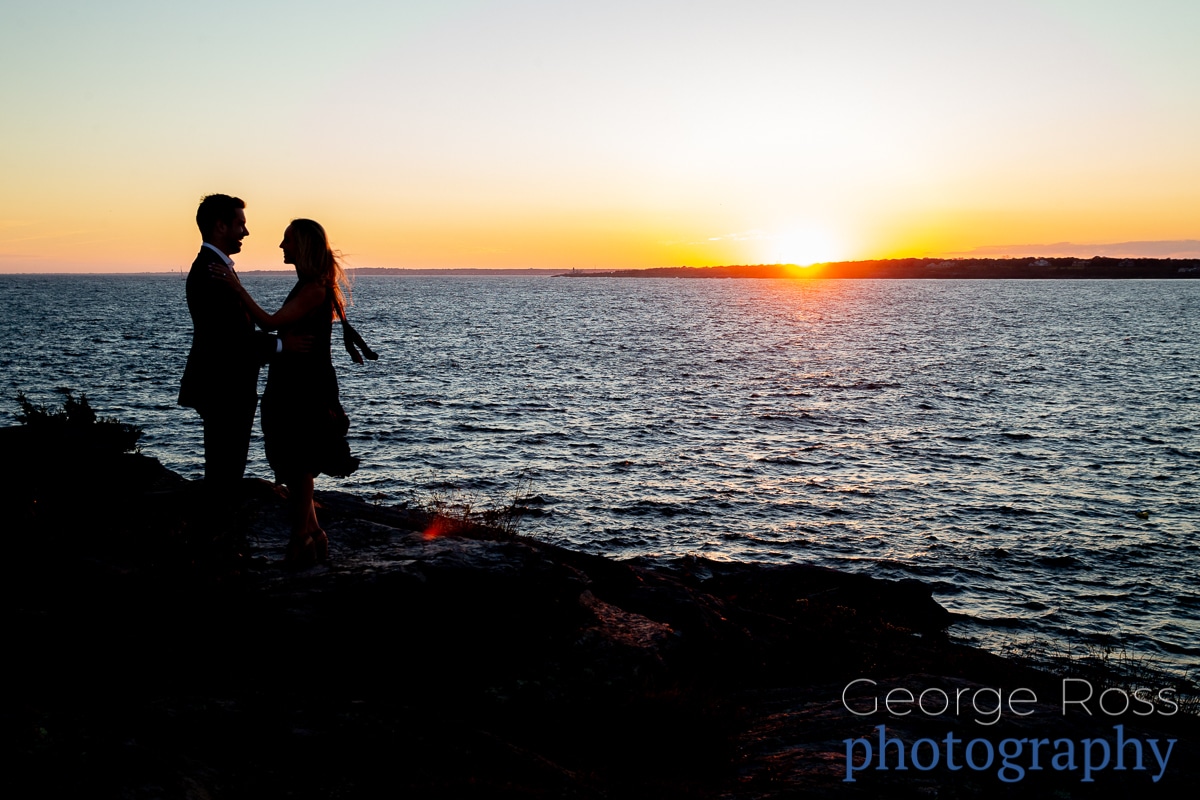 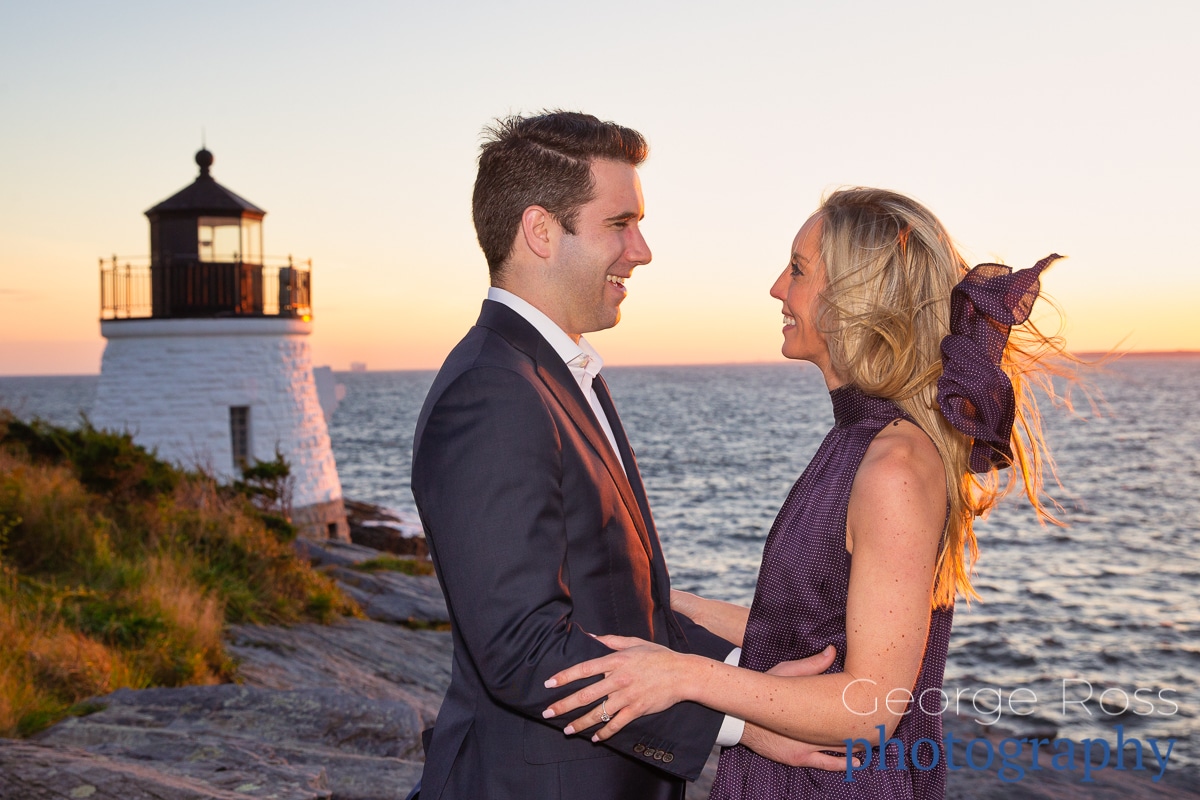