A Surprise Proposal in Providence College 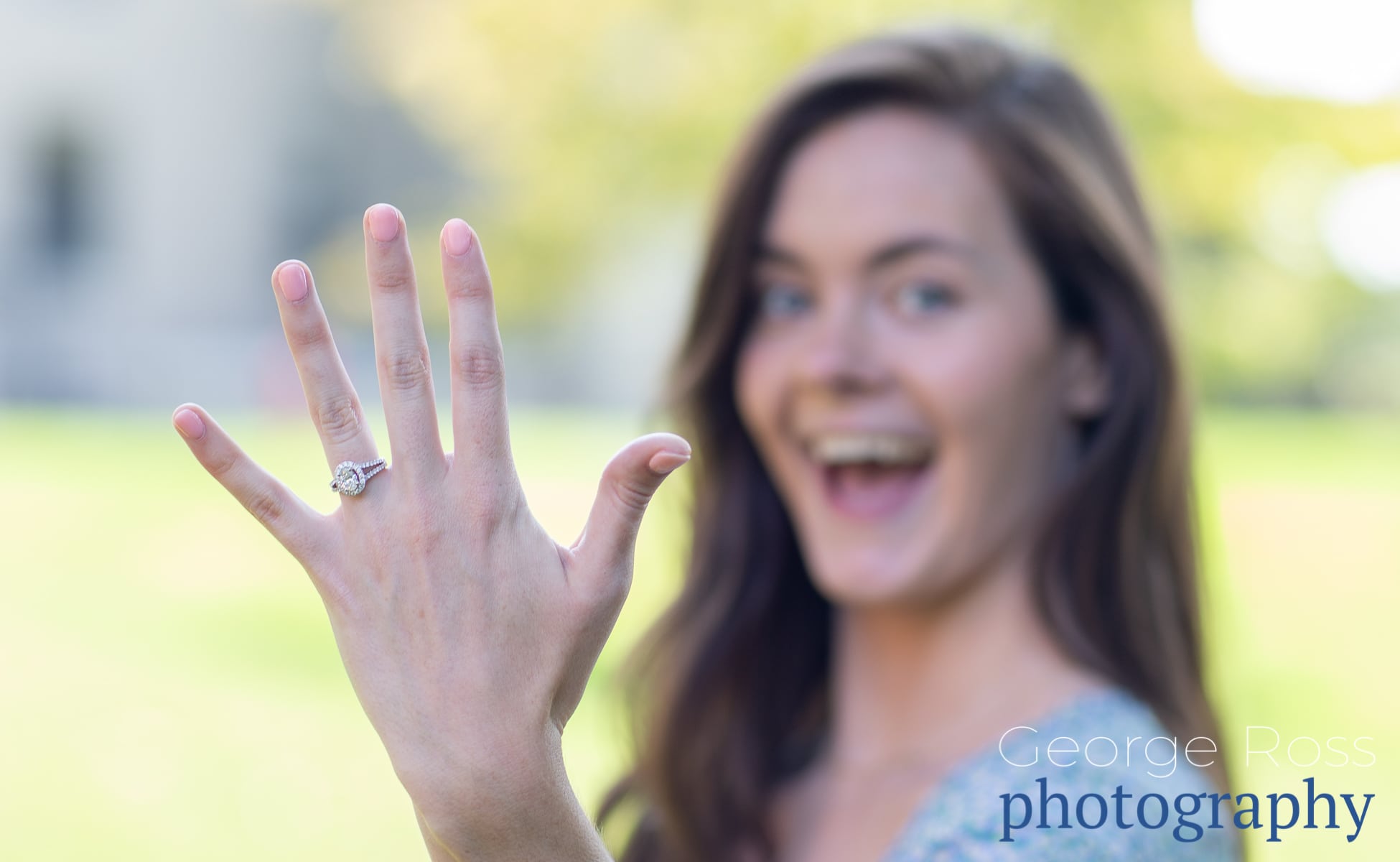 A Surprise Proposal on the Grounds of Providence College

Dani and Rob met each other while attending Providence College, and they now live a stone’s throw away from ‘PC.’ Providence College Friar’s through and through. With PC in their blood, where better for Rob to propose to Dani?

When Rob first contacted me, I felt good about this compared to my prior surprise proposal, where parking was almost impossible. Guaranteed parking is crucial for me when planning a surprise proposal because if I cannot be there on time, it will be a bust!

My only experience at PC was the few seasons that I had photographed the Lady Friars basketball team. Still, Rob made it easy for me and sent me an annotated map with parking access, and ‘X’ marks the spot for the proposal.

Rob’s plan for the surprise was well thought out, a scavenger hunt on the college grounds, which would end in front of the genuinely magnificent Harkins Hall. Specifically, the great sign for Harkins Hall.

To ensure that Dani would not become suspicious, the couple had enjoyed a few walks around the grounds in the prior few weeks. So the scavenger hunt would ‘just’ be another day enjoying all the college grounds had to offer.

Rob had picked the Labor day holiday for the proposal between 11:30 am, and 12 pm; perfect Providence would be quiet.

On the Friday before the Monday holiday, I texted Rob to let him know that I would be out of circulation on Sunday, should he want to contact me (I had a 12-hour wedding shoot), and we will coordinate on Monday morning.

When Monday came along, I was a tad tired after a very long day at the wedding, but I had to shake off any tiredness to get on top of my game for the proposal.

I sent a text to remind Rob that I required a selfie or some type of photography to assist me in recognizing them, and another text at 10:15 to let him know I was en route, and another when I was parked at 11:00 am.

My phone is set not to receive texts while I am driving, and when I was parked, I checked my phone, and there was a photo; phew! It was the best type of photo for me, a selfie of them both with the clothes they were wearing today. I opened my truck door and stepped out and a car pulled in behind me, and yes, it was Dani and Rob! I immediately climbed back into my truck and looked at my phone until they were gone. She would not recognize me, but I did not want Dani to see me now and again hanging out in PC.

After they left, I got out of the truck and started to prepare my gear; I saw Rob coming back to get his “sunglasses” as he reached into his car for the ring box. I wished him well, and we went our separate ways.

When I walked up the approach road on this holiday where there were no students in the school, it was pretty clear that there was no good place to hide. I figured that I would see them approach the hall from afar, and I would walk up to the Harkins Hall sign from the other direction and then hide behind a tree.

I took a couple of test shots and hid my camera in an empty sports bag that I was carrying to hide the camera. I was concerned about the light because of the broken cloud, one minute, it was very bright, and the other, it was cloudy. I shoot in manual mode and hoped that my preset camera would be on point when the time came.

I waited at the entrance gate to the college, and when I saw the couple, I casually walked towards our target sign. When I arrived at my marked tree, they were having a long conversation, and I had to tuck in and peer around the tree, waiting for the knee to drop.

I watched them chat, and then Rob gently spun Dani around until she faced him as part of his devious scavenger hunt. He pulled out the ring box and dropped to his knee.

I jumped out of my hiding place and quickly took a definition shot with the grandeur of Harkins Hall in the background before zooming in to capture the intimacy of the moment. 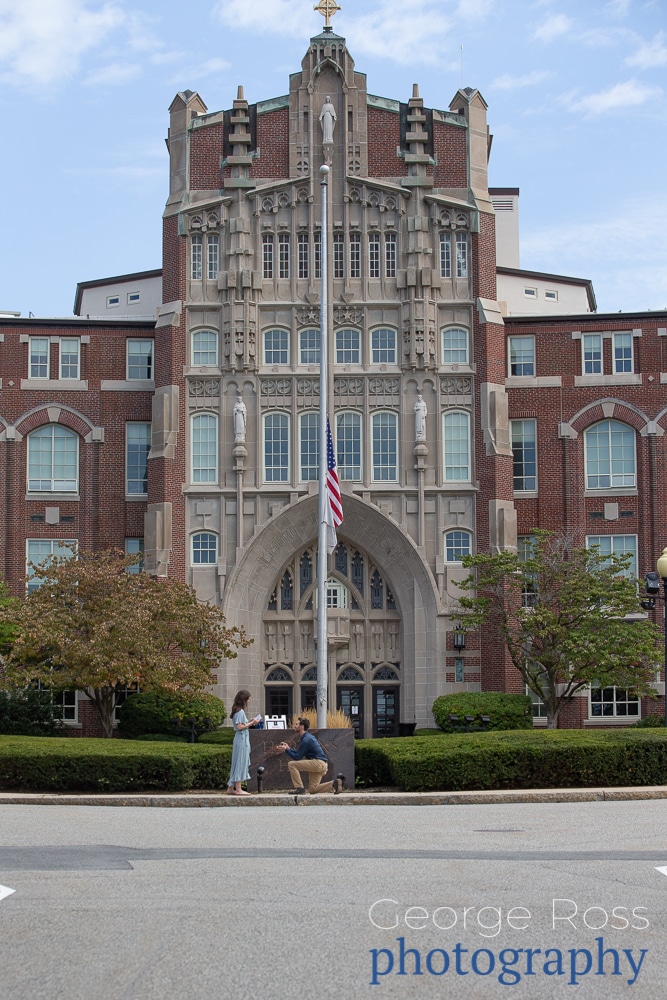 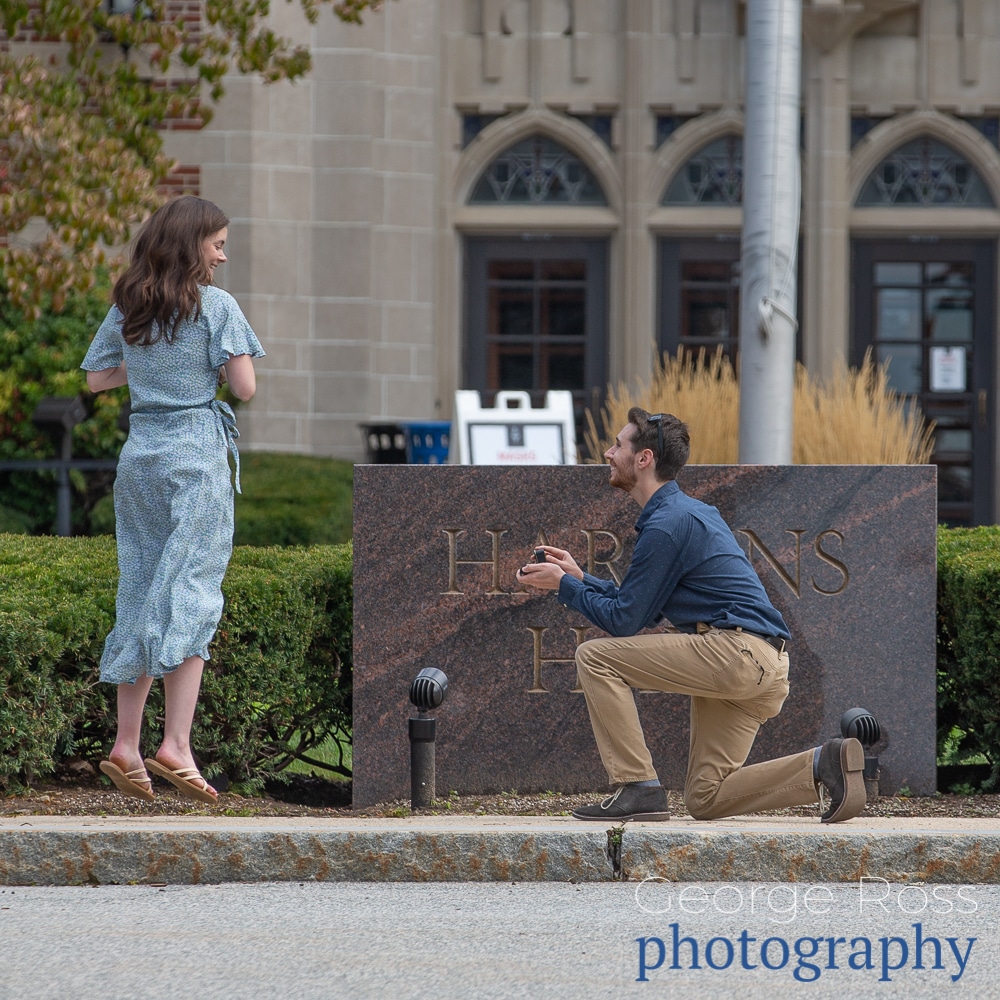 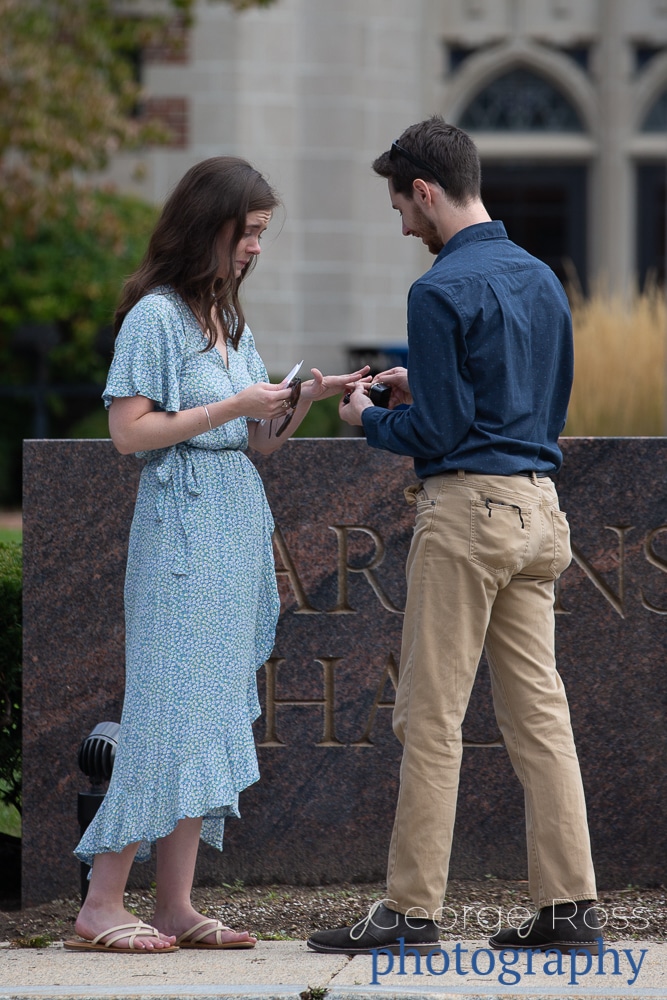 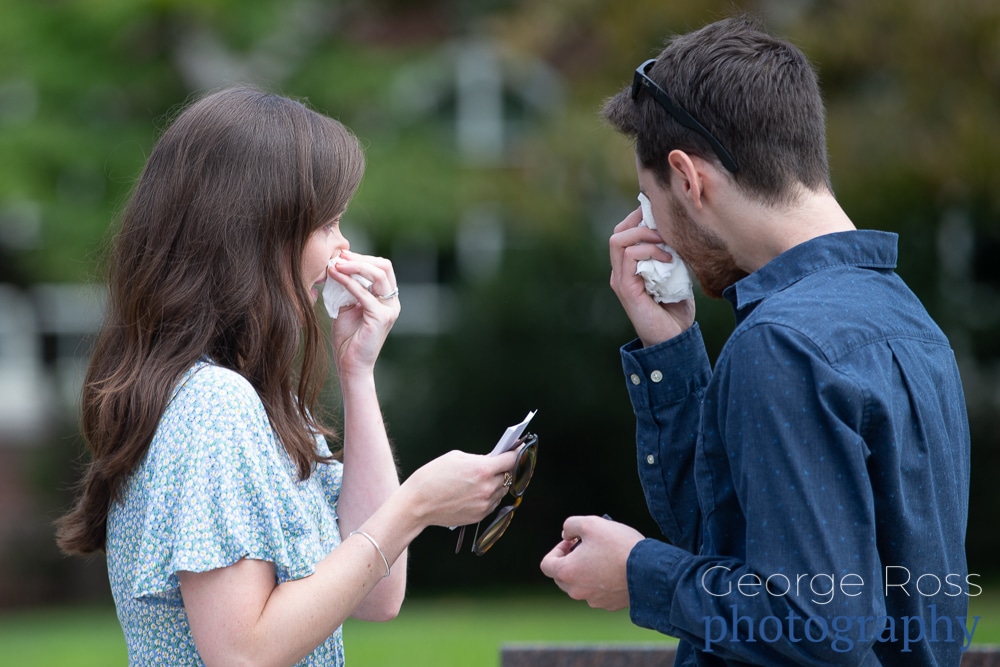 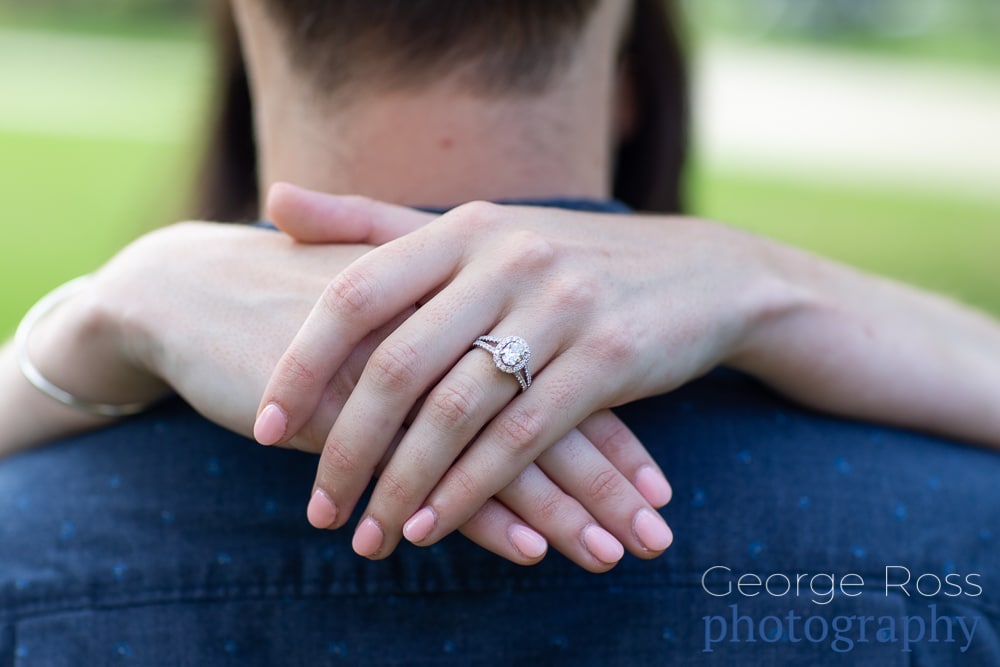 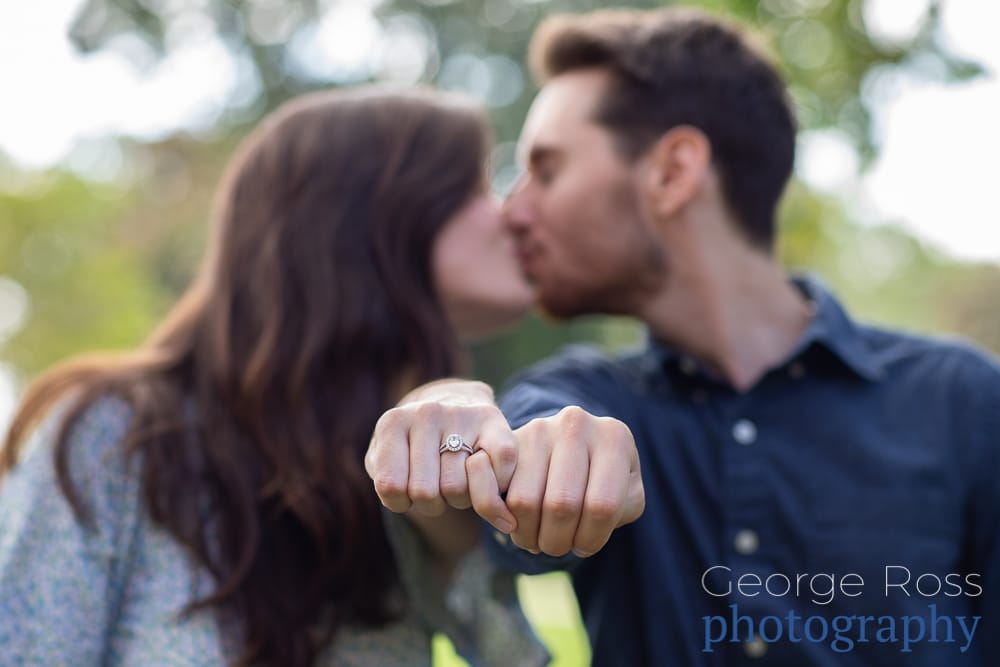