Skip to content
A Surprise Proposal on a Yacht Cruise in Newport, RI 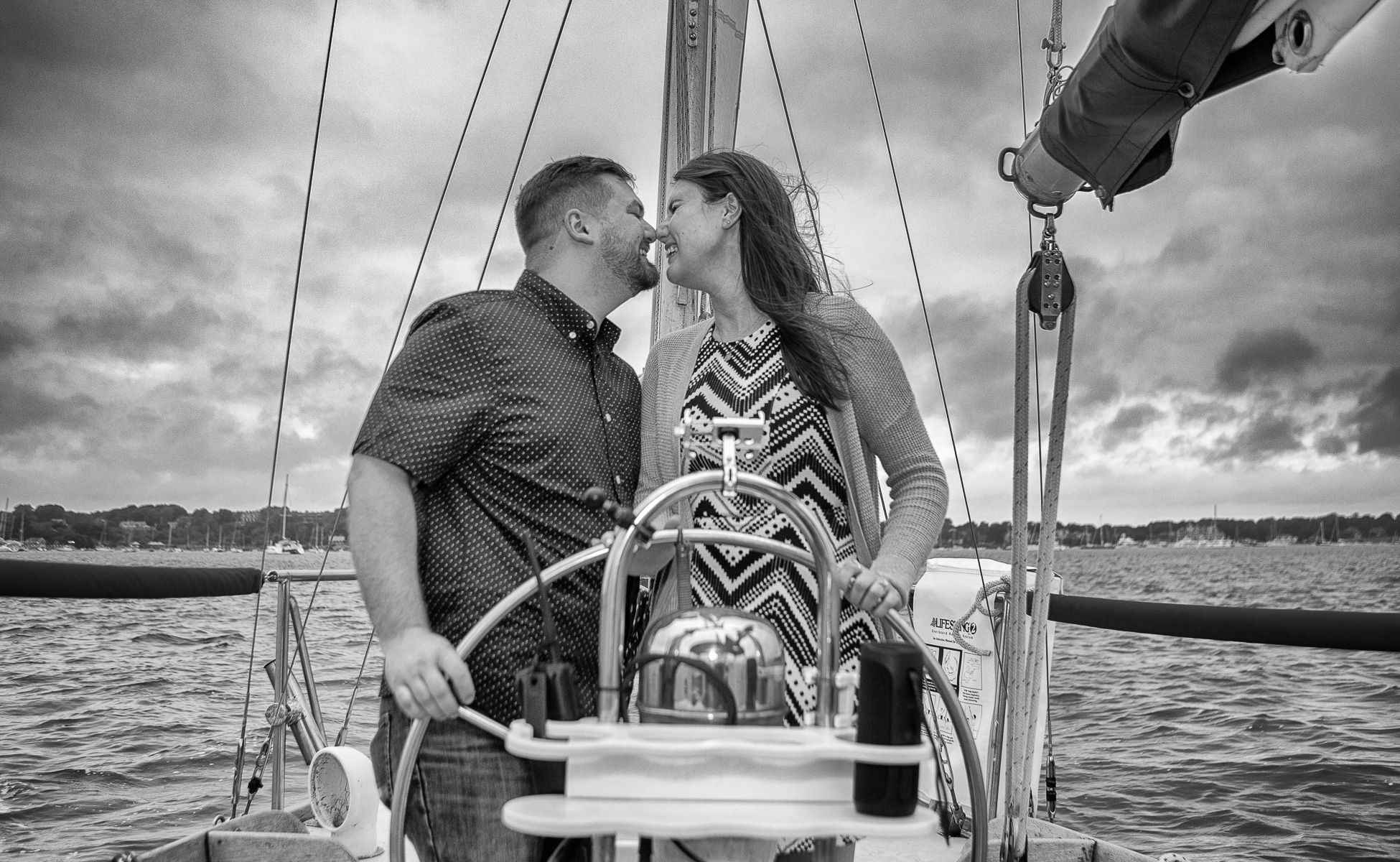 A Surprise Proposal on a Yacht Cruise, Newport RI 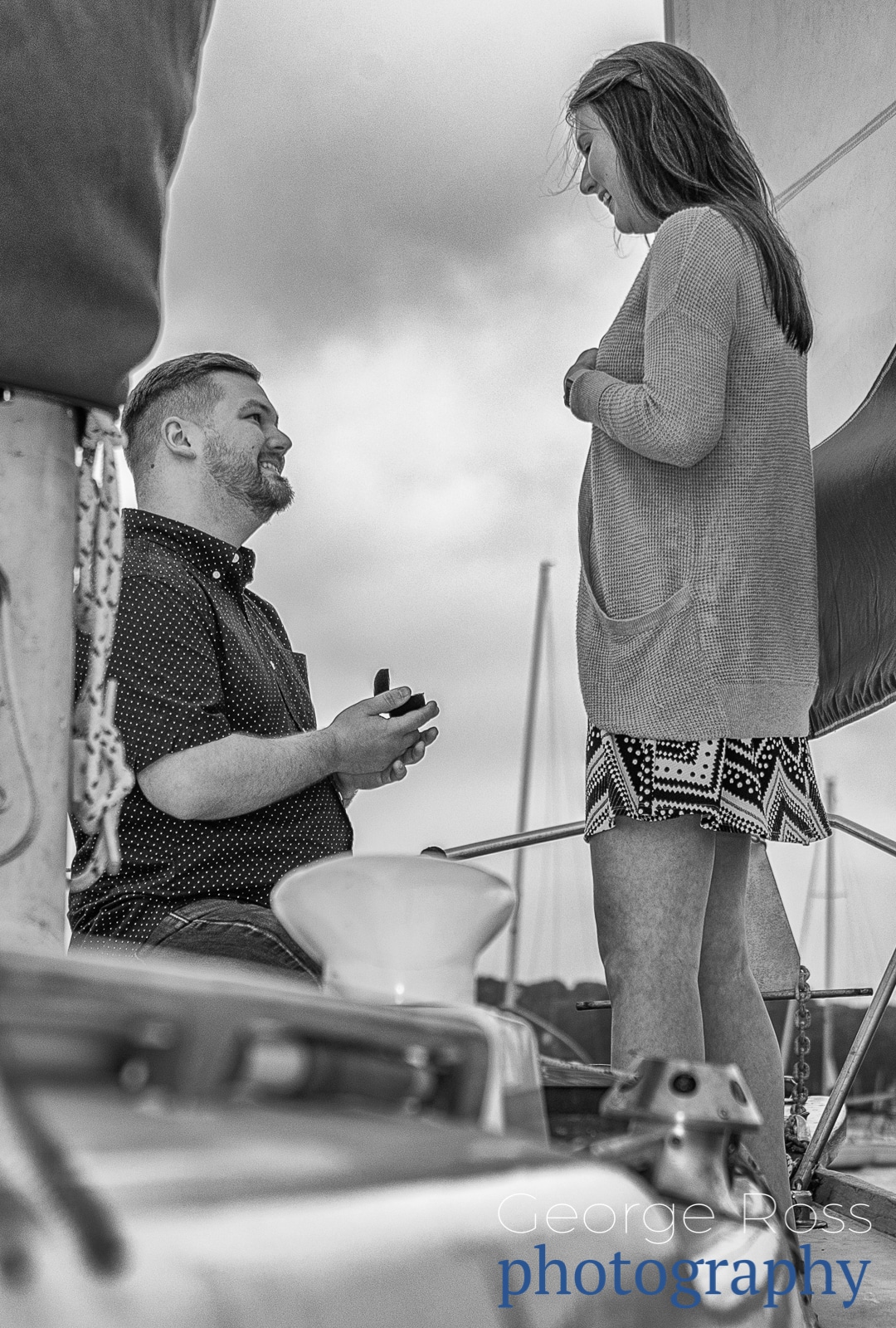 A Surprise Proposal on a Yacht Cruise, Newport RI

A sunset cruise surprise proposal on its face sounds exciting, but it would require ninja-level skulduggery to pull it off. Why? Because it was a private charter with Zach and Amanda, Captain Sam, and myself!

When Zach first contacted me, he did not have any firm plans other than an idea in the planning. His goal was to book the cruise during the period of late July to Mid-August.

I was on deck.

A couple of weeks later, we had a firm date of July 25th (I later found out from Amanda that this day was known as 1/2 Christmas). We would be sailing with ‘On Watch Sailing,’ out of Newport, Rhode Island on ‘The Wren,’ a 35′ yacht built in 1969. And, yes, indeed, there would only be the four of us on the boat, in close quarters.

How do I explain my presence on Zach and Amanda’s private cruise and not give up the game? I pondered over this for a while and decided that for my cover, I would be a photographer working for ‘On Point Sailing.’ And to ensure this would be flawless, I called Captain Sam and informed him of the ruse. Captain Sam was only too happy to play along. Now we needed the weather to cooperate.

In the weeks leading up to the proposal, the Rhode Island weather had too much rain and too many thunderstorms.

Zach was on tenterhooks because the projected weather for his special day had thunderstorms and rain in the forecast. The evening before the cruise, Zach told me he had 20 tabs open on his web browser as he was constantly checking the weather.

However, the weather forecast called for rain ending mid-afternoon, and the cruise was scheduled for 6:25 pm. Zach checked with Captain Sam and got the green light.

There was a small craft advisory in the marine forecast, and I called Captain Sam to determine whether or not I should fit my cameras with their Aquatech foul weather covers. After that conversation, I decided that it would make sense to do so.

There was one issue that I had to resolve, the timing of the proposal. Given that I was On Watch Sailing’s (pretend) photographer, I suggested to Zach that at some point in the 2-hour cruise, he would ask me to take a photo of Amanda and himself. Afterwhich, he could propose because I would have my camera ready. He agreed, perfect, we had a plan.

I studied photos of ‘The Wren’ online, and it was clear that I could only use a 24mm-70mm f/2.8 lens due to the cramped seating arrangement and the opportunity to include the landscape in the background, but I also packed a 70mm-200 f/2.8 just in case. It was a very cloudy day, and even though we would be in close contact on the yacht, I felt that the use of a strobe would make sense. And so, I also packed my trusty Godox external battery pack and my favorite Gary Fong diffuser to soften the strobe light, which would be very important being so close to my subjects.

I made my way to the quay where a water taxi would take us out to The Wren’s mooring. While waiting at the jetty, Zach texted me that they had arrived; they were 5-yards away from me, I looked over with great subtlety, and Zach and I made passing eye conta 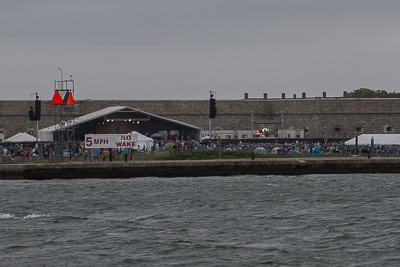 At the appropriate time, Captain Sam called out to the passengers, Sam and I shook hands first, and then he turned to Zach and Amanda and introduced me to them as the On Watch Sailing photographer. I asked them both if it would be okay if I included them in some of my photos, and they both agreed. And to seal the deal, I informed them that they would need to sign a model release form to give On Watch Sailing the right to use the photos, and that we could do the paperwork after the cruise. Again, they agreed, and we made our way onto the water taxi.

Once on The Wren, the Captain started the engine, untied us from the mooring and we were on the move. As we left the harbor, he set sail and switched the engine off.

As I was preparing my cameras, we sailed past The Newport Folk Festival, where Allison Russel was playing and was joined by a surprise guest, 10-time Grammy award winner Chaka Khan, who performed her 1978 hit ‘I’m every woman.’ For us, it felt like a private performance.

Then out of the corner of my eye, I could see Zach drop to his knees. This was not what we had planned. If there is one thing that I have learned from photographing 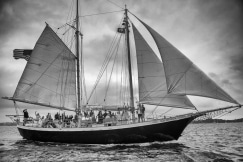 surprise proposals is that no matter how well I think I have organized the moment, always prepare for the unexpected. Nerves will often overrule the plan!

In Zach’s mind, he saw the perfect moment, and it was excellent they were on the bow of a yacht with the breeze blowing back their hair.

There is no clean shot from the stern to the bow, but I was able to lean over the side rails and capture the wonderful moment that had given Zach sleepless nights in the weeks prior.

I made my way up to the bow and captured Amanda’s emotions. She was thrilled.

We introduced ourselves and conducted a mini-engagement shoot. It was not easy, standing on the bow of a yacht under sail with unsteady feet, but Zach and Amanda were troopers. Afterward, we made our way back to our seating at the stern. During the return trip, and to make it a little bit more special, Captain Sam has reached out to the captains of two other yacht charters, whose guests cheered as they sailed closely by us.

As we approached the mooring, there was one last thing to do, Amanda called her mother on Facetime. As if there was not already enough joy on The Wren, her mom added more. 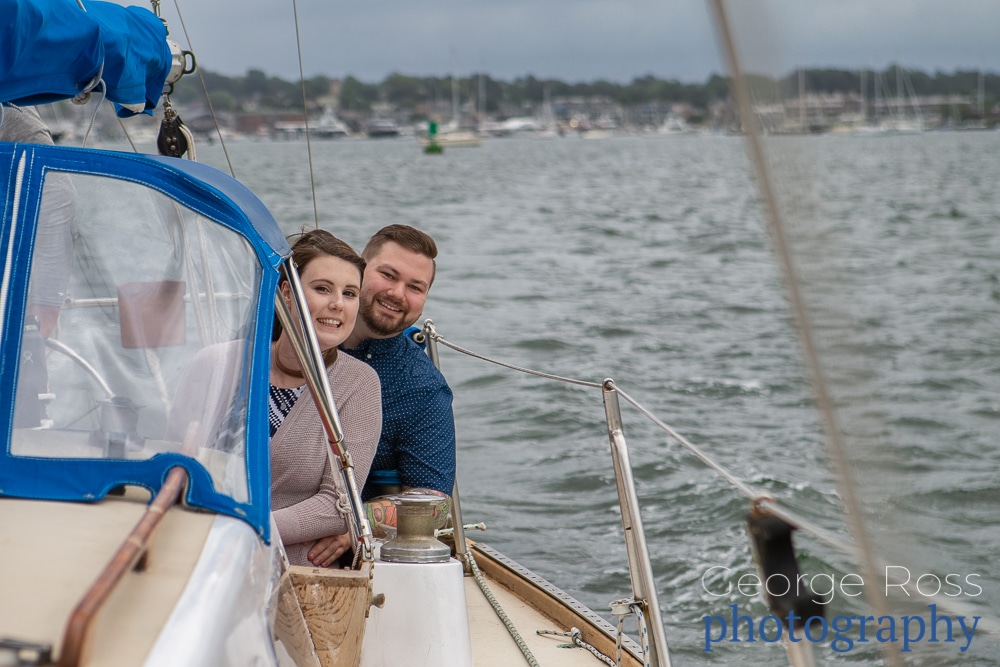 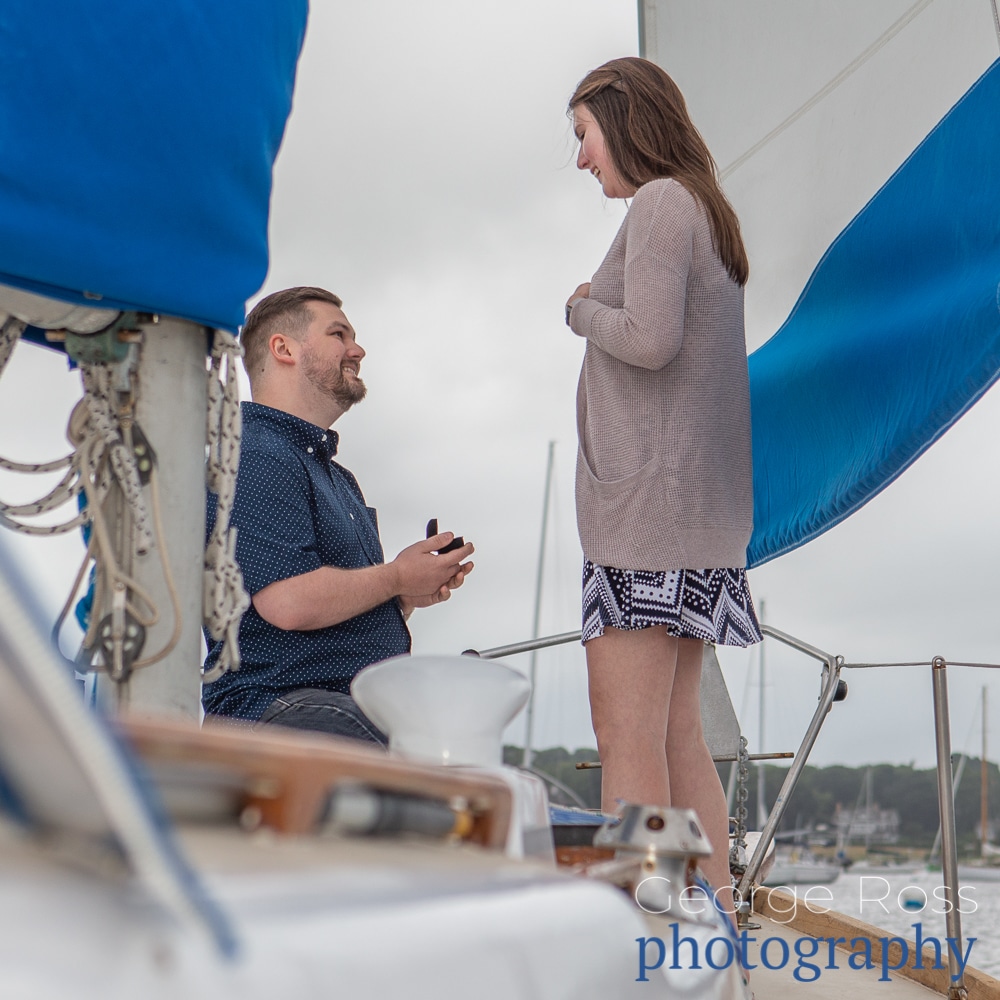 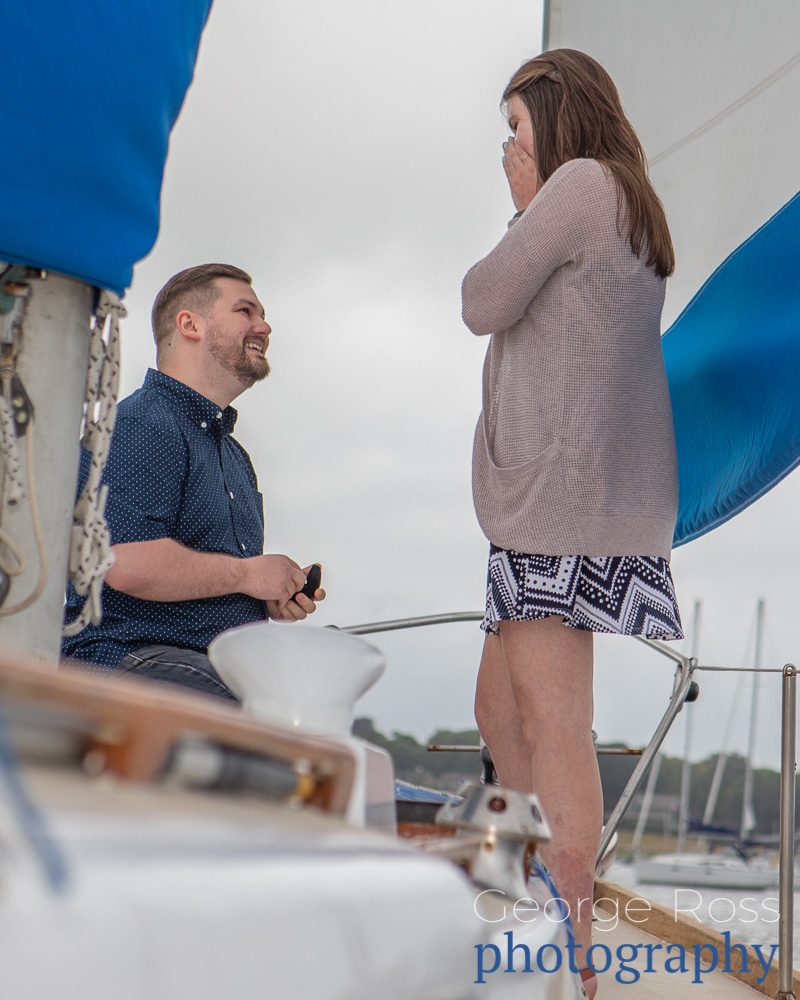 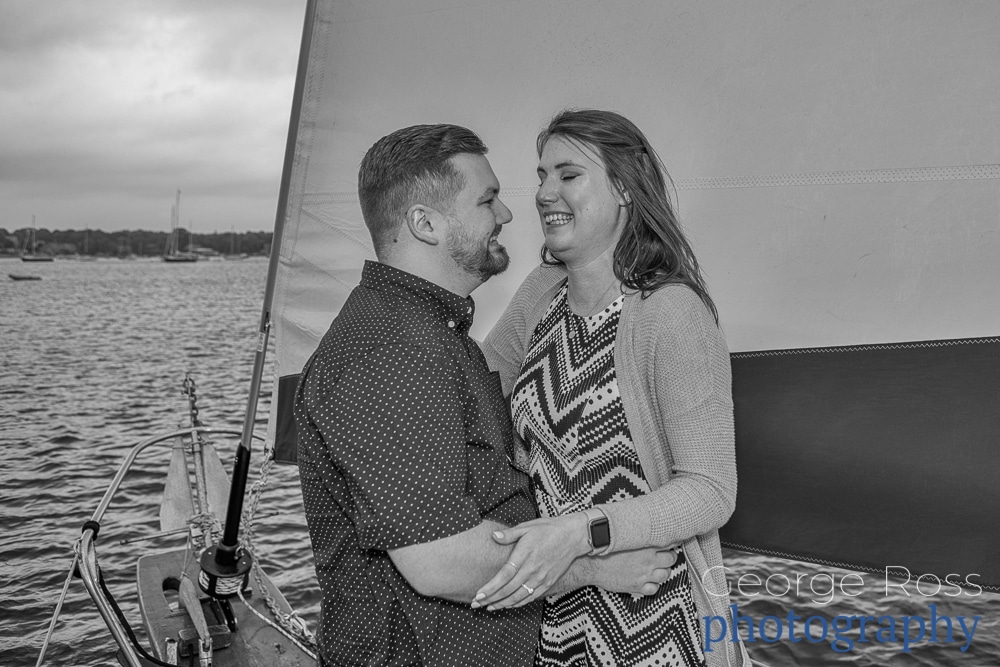 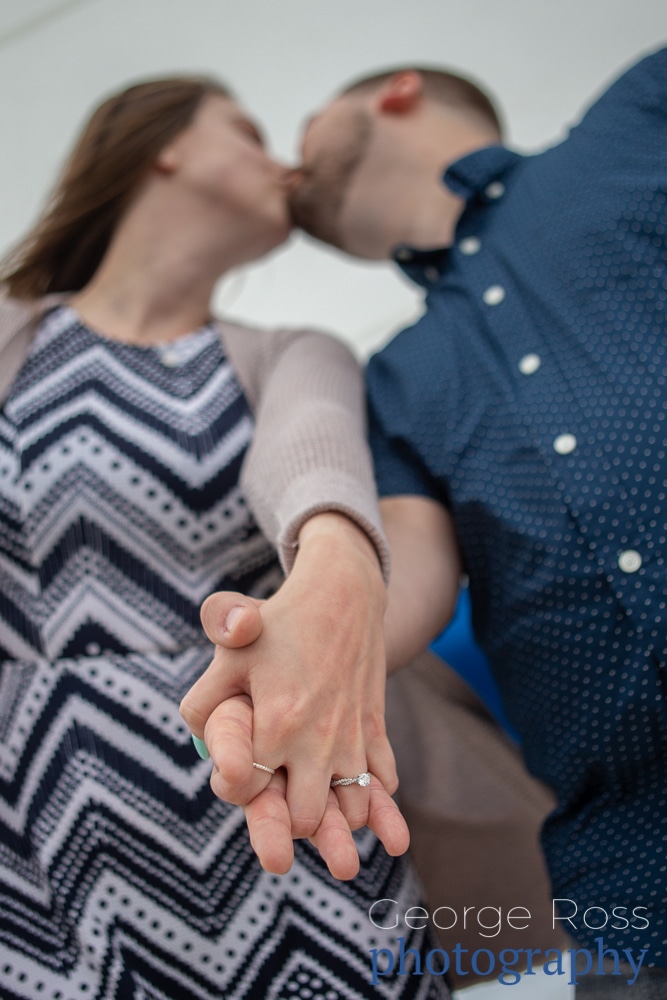 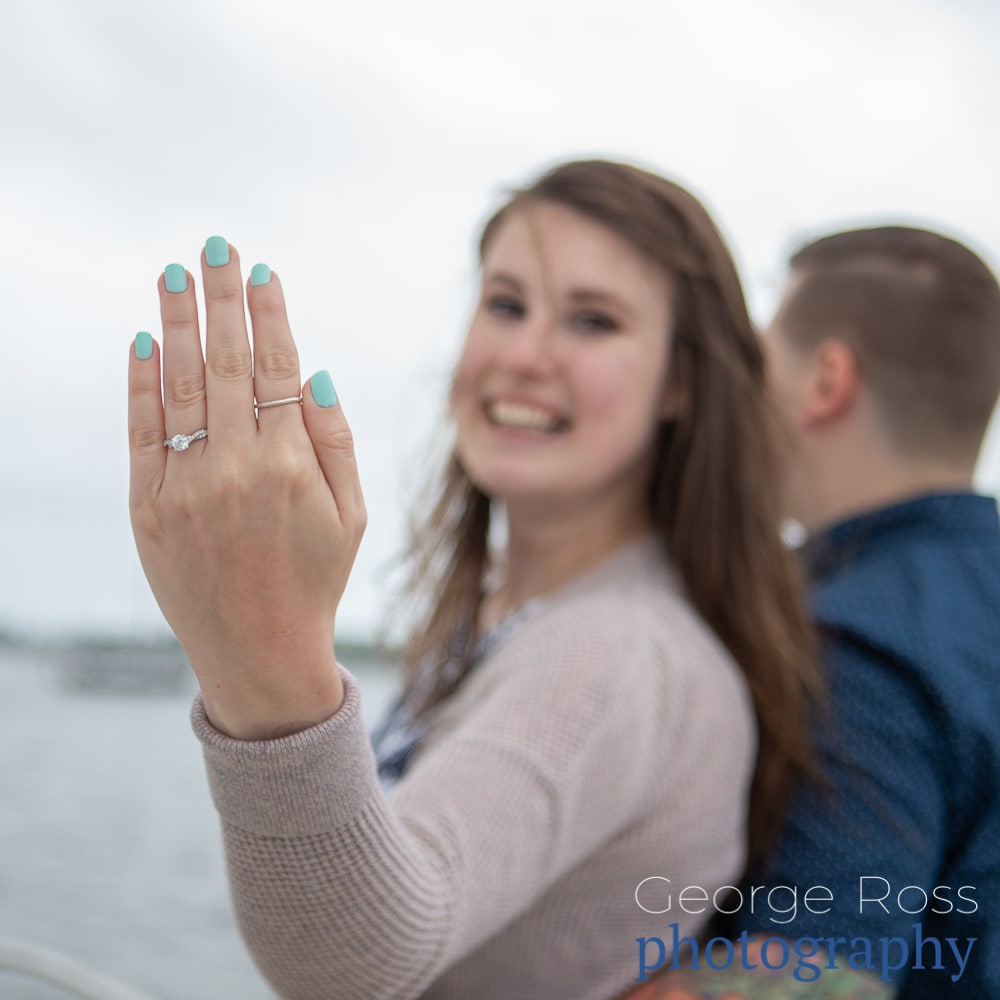 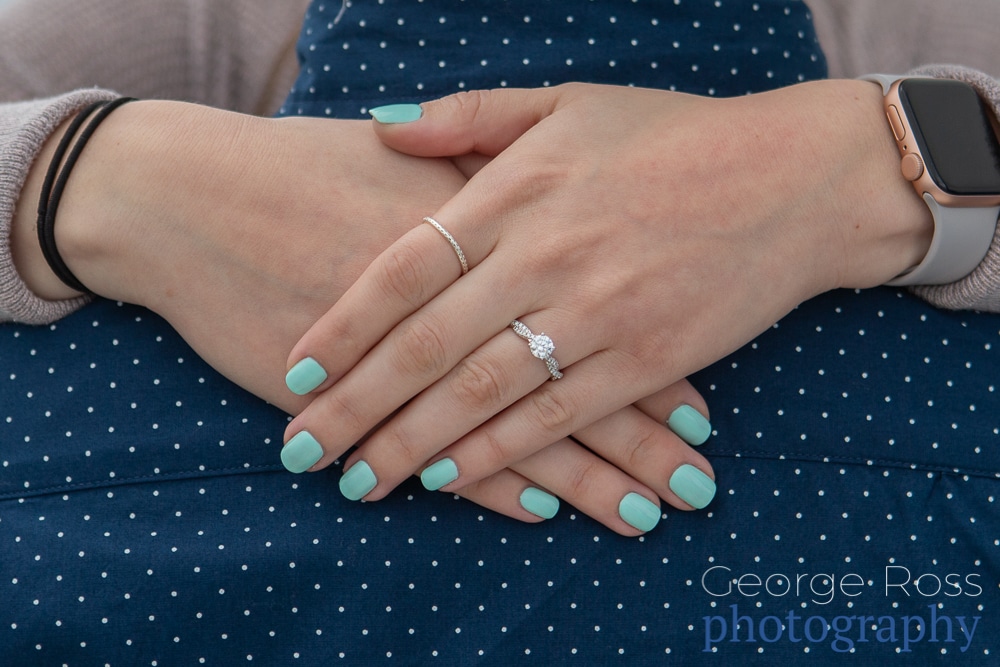 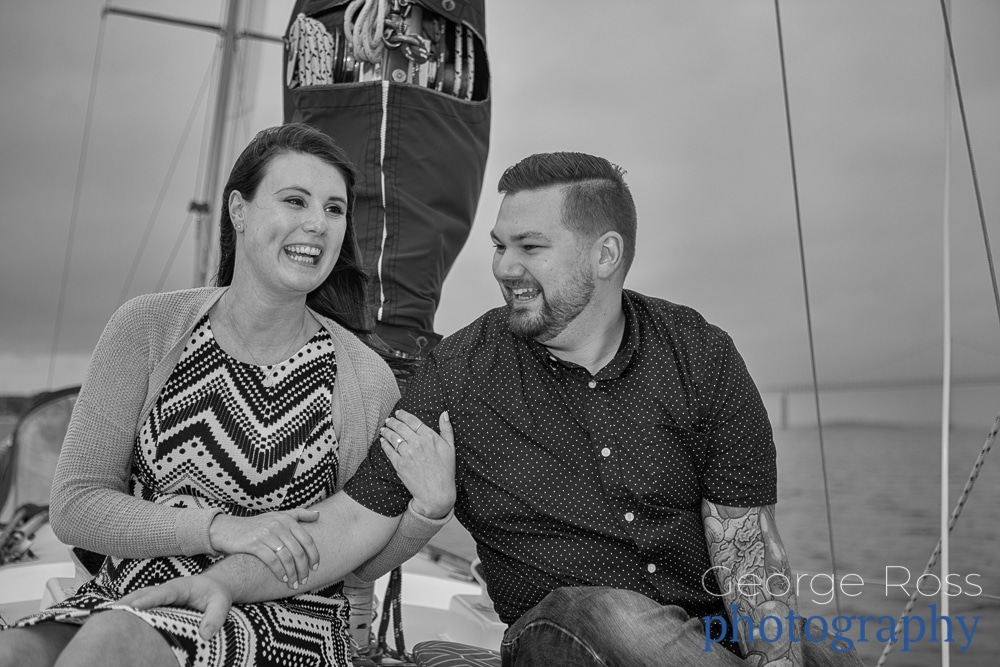 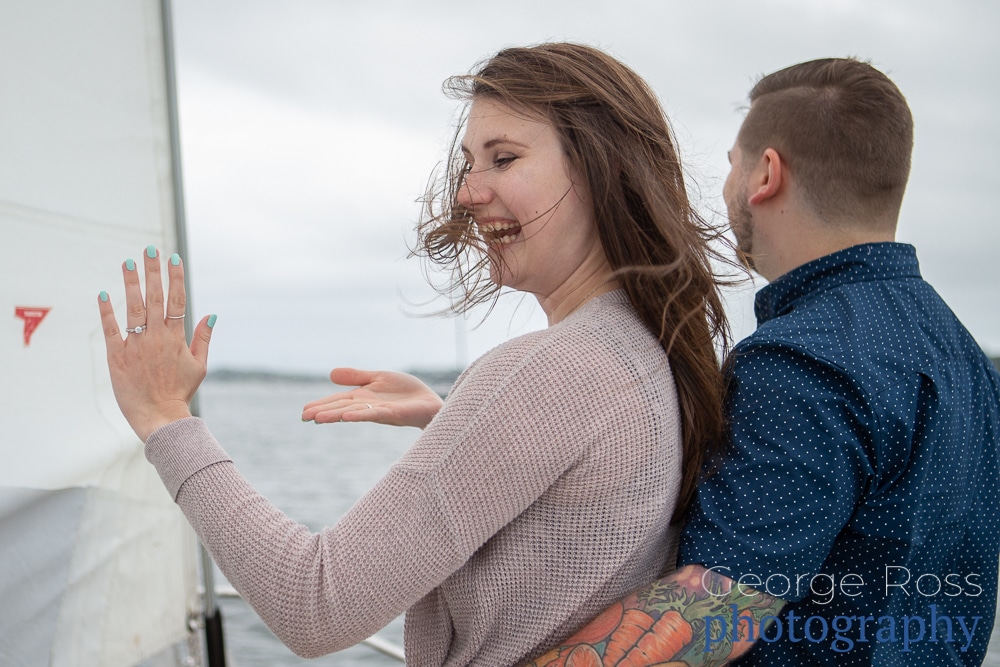 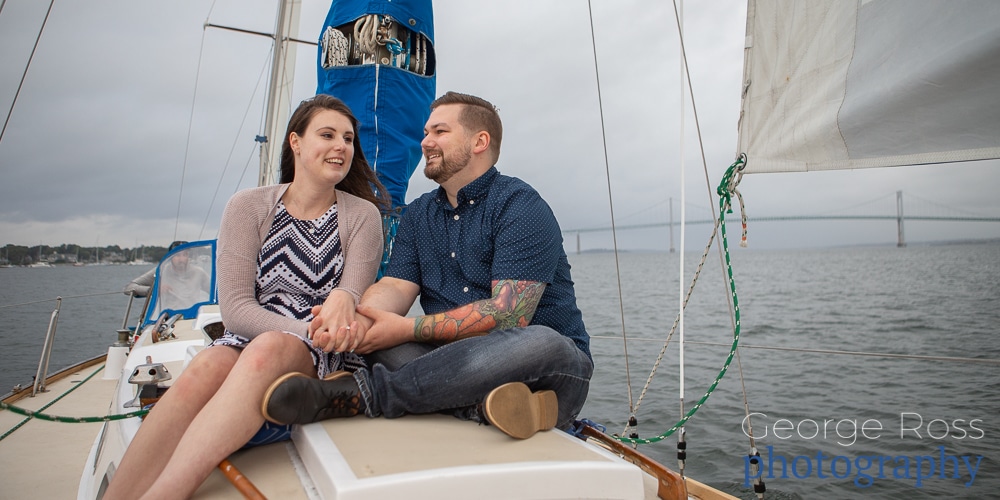 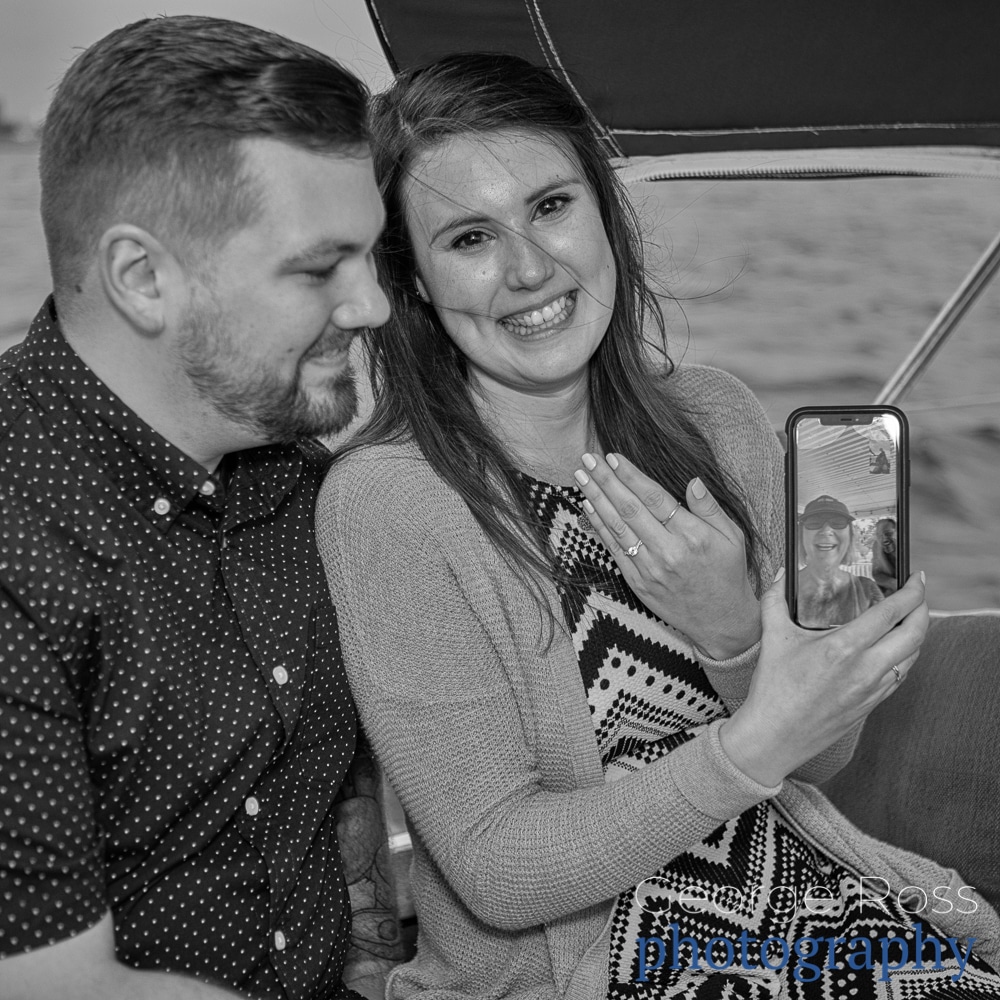