Behind the Scenes at a Surprise Marriage Proposal Photoshoot

Some photo shoots are simple and go as planned, but those are in the minority; most are involved and create more than a bit of excitement.

Many of my clients are from out-of-state, which can add to the event’s drama because they lack local knowledge and depend on me for guidance. I’d thought I share the tale of one surprise marraige proposal that was filled with excitement for all involved.

I cannot share the photos because my client has asked for privacy. That said, the last picture with the white shadow people is from this shoot.

When Charles emailed me via a contact form on my website, he requested a sunset proposal with the Watch Hill lighthouse in the background in late August, prime beach season in Rhode Island, and from the get-go, I could see this being a logistical nightmare.

We followed up with a phone call; Charles was from out of state and sought guidance. I had previously photographed an engagement at this location, but that was in winter when beach access is much easier.

I suggested that he reserve a table at The Ocean House Hotel and walk onto the beach after dinner. He should also check with the hotel to obtain beach access. I sent him the graphic below detailing how he could get to the site of his photoshoot from the Ocean House. I also annotated the image with the direction of the sun at the time of the shoot. 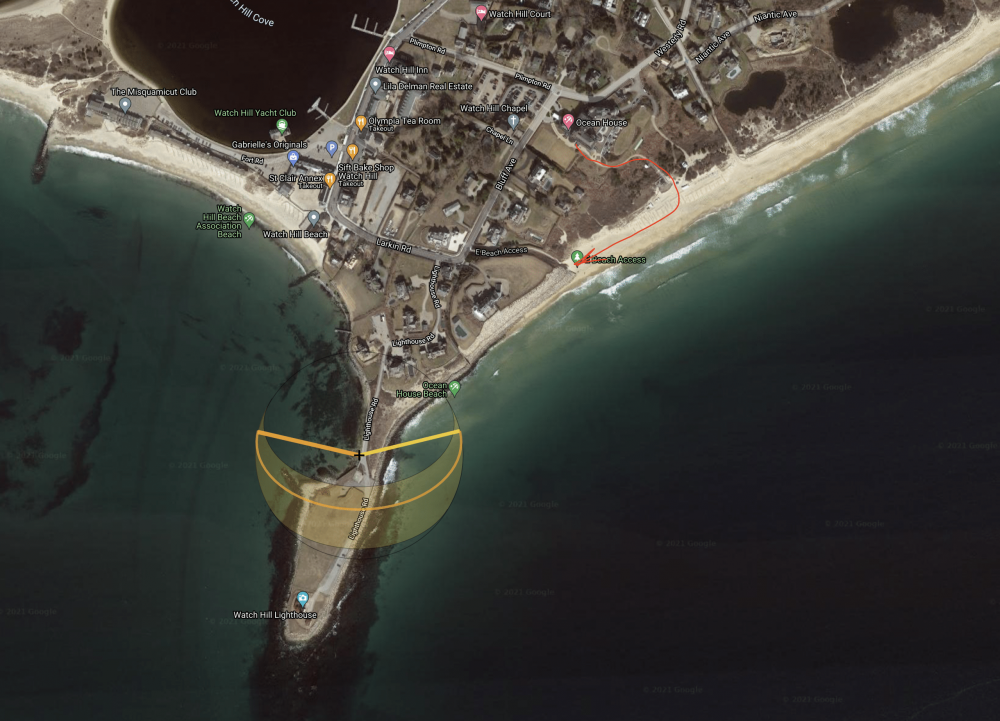 Charles called me the following day to inform me that he had reservations but could not confirm beach access; I suggested contacting the events director. He called me back after making that call and said it was a no-go. Beach access was for guests only and those attending hotel events.

Back to the drawing board!

I am not overly familiar with that part of Rhode Island because it is exclusive (the hotel’s neighbor is Taylor Swift’s mansion) with minimal parking. One of the parking lots in the village has a $50 fee. 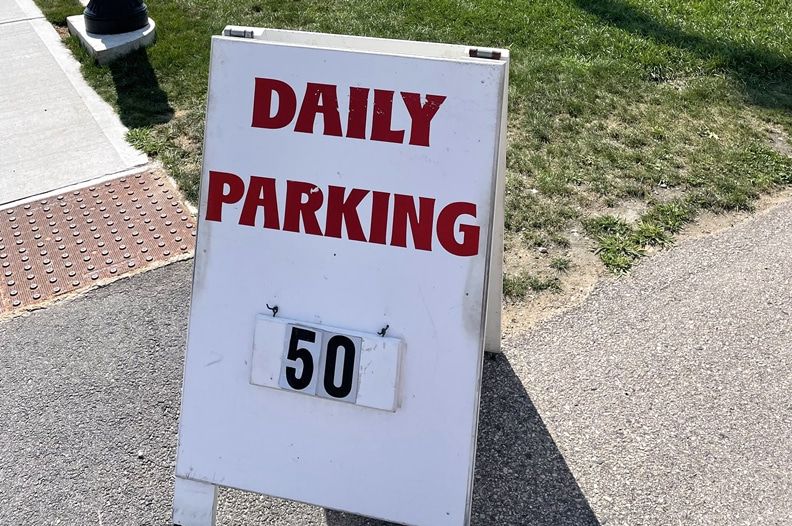 Charles asked where else he could dine? And I suggested Ella’s in Westerly, a wonderful dining experience. He booked a table, and now we had to handle the logistics of getting on to the beach.

There is public beach access between Taylor Swift’s home and the hotel, but I could not guarantee parking for myself or Charles. Parking is pivotal because whatever location my clients choose for a proposal shoot, I MUST be able to park at least 30 minutes before. I gave this consideration and came up with this plan:

Charles and his girlfriend would take an Uber to the restaurant, stopping to watch the sunset at the lighthouse. I would ask my wife to drop me off, and after the shoot, pick me up, and we would go to dinner.

We had a workable plan!

On the day before the shoot, I prepared all of my gear & charged my batteries to be ready for the following day. On Saturday evening, I packed my backpack and a small sports bag to conceal my primary camera. Using the sports bag in this way, I can hide in plain sight. I packed the truck, sent Charles a text to inform him that I was en route, and gave him my ETA. Mags and I enjoyed the drive to the beach; she dropped me off; I sent a text to inform Charles of my arrival and walked to the beach.

It was a cool breezy evening, and only a few groups of people were in this section of the beach. I framed up the ideal shot with the lighthouse in the backdrop and sent it to Charles so he would know where to drop to a knee. This spot would be best because there were people on the other side of the rocks. 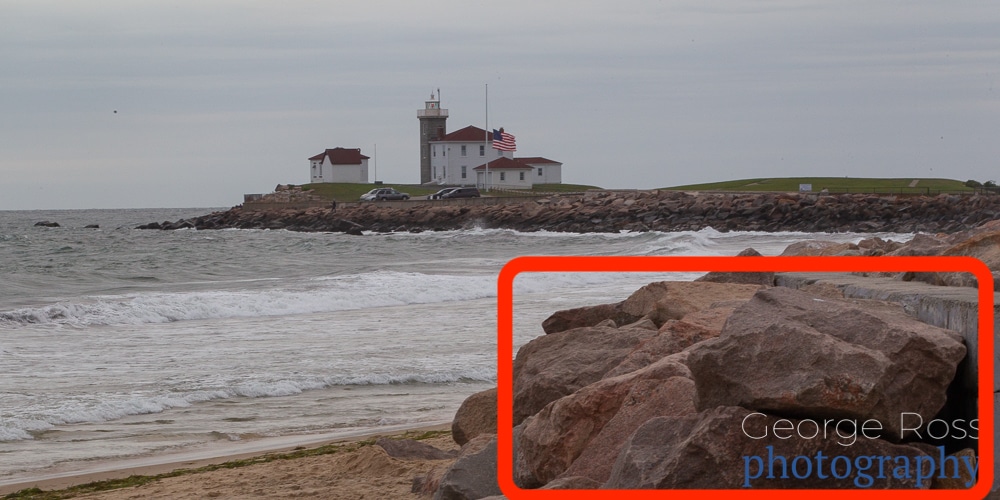 After waiting and waiting, I received a text informing me that Charle’s could not get an Uber and was going to drive and could I check to see if there were any parking spots. So, I left my place on the beach and walked back to the road; there were two open parking spots; I photographed their location, sent them to Charles, and headed back to the beach.

Eventually, Charles and his girlfriend arrived.

One of the problems with sunset surprise proposals is that you run out of daylight when the couple runs late!

I set myself up at the chosen spot only to watch the couple walk past it. In my experience, this is pretty normal because proposing is a nerve-racking business, and the partner proposing has only one thing on their minds. As they moved along the beach towards the lighthouse, I was no longer hiding in plain sight; I looked kind of odd!

A tactic that I often use in situations like this is to join the company of a family group. I saw a family having a picnic and walked over and asked them if I could hang out with them. Of course, I have to tell them what I am doing, and every time I do this, my ‘temporary family’ are excited about being involved in the plot. My camera is all set; I have taken a couple of test shots, it is in my hand, but it is concealed in my sports bag. I watch my nervous client and a large family group walking along the beach behind him. All I could think was, “not now, not with the only people on the beach in the shot.”

Meanwhile, my ‘temporary family’ were giving me instructions to get my camera out, or I would miss the proposal. I had to reassure them that this was not my first rodeo and that the camera would remain concealed until I saw the knee dropping to the ground.

After a few moments of intimate conversation, Charles dropped to his knee and proposed, and my ‘temporary’ family cheered. It was a truly wonderful moment.

That said, he proposed with the only people on the beach in the shot. Situational awareness is not common during a proposal; nerves rule the day! 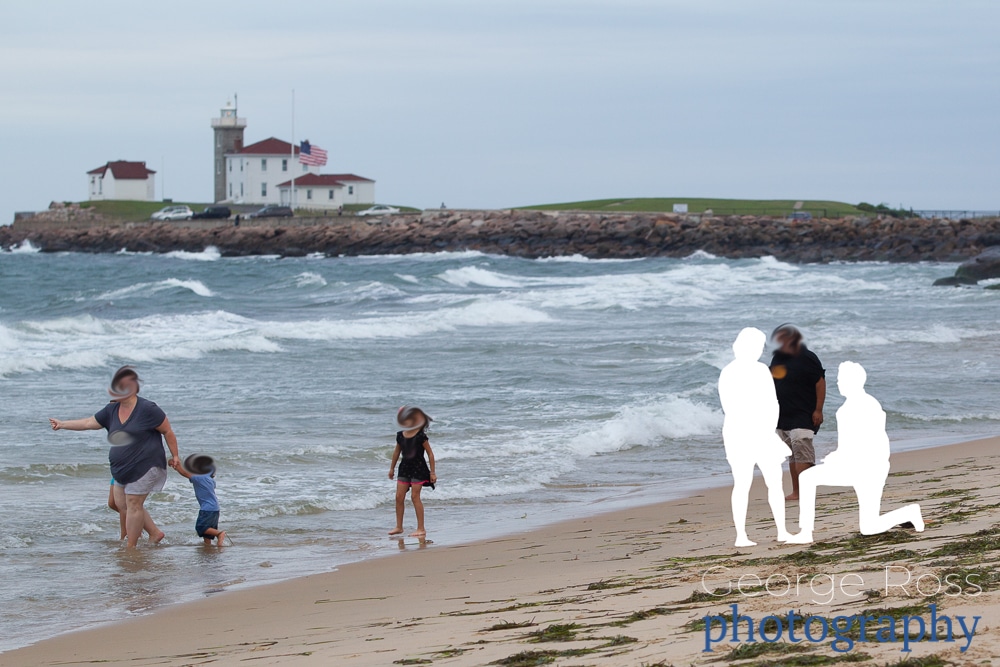 After the proposal, we did a proposal do-over without the strangers in the photos.

I gave Charles what he envisioned, a marriage proposal in front of the Watch Hill Lighthouse. After the do-over, we had a mini-engagement shoot as the daylight was fading.

I left the couple on the beach, called my wife to pick me up, and went to dinner.

After dinner, I downloaded all images and sent Charles a few that the happy couple could share with their family and friends.

Each surprise proposal photoshoot has some degree of drama because the process involves three parties, and one of them does not know what the plan is.