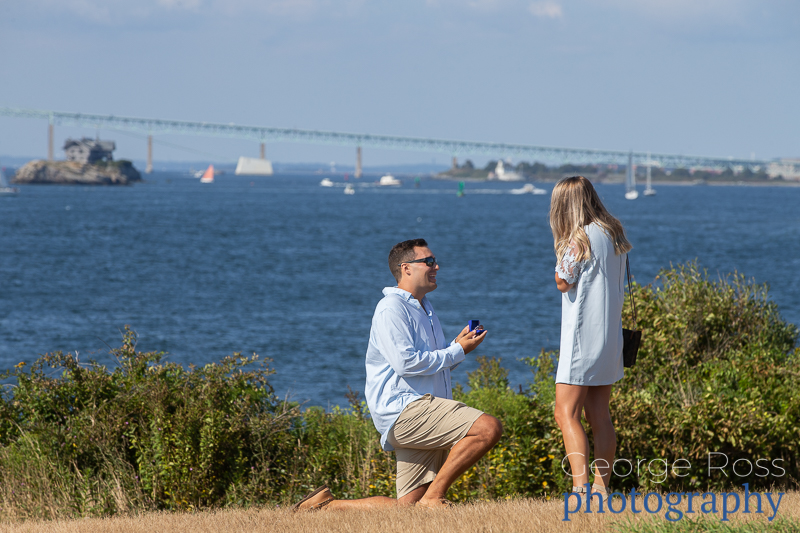 Ahead of Jason and Sydney’s vacation in Newport, Rhode Island, Jason reached out to me and asked me to capture the moment when he would drop to one knee and propose to his girlfriend.

The selected location for the proposal is beautiful, the lawn of the Castle Hill Hotel. Under normal circumstances, it would be bustling on a summer day; the pristine lawn is home to many Adirondack chairs looking over Narraganset Bay and Newport’s Pell bridge. Unfortunately, due to COVID-19 regulations, the hotel has to restrict the number of guests on the property, which is a terrible situation for the hotel. However, for my purposes, it was a plus. Fewer people to deal with is always a plus when undertaking this kind of shoot.

I would like to give a shout-out to all of the staff we encountered at the Castle Hill Hotel who accommodated my needs with professionalism and kindness,

Jason and I coordinated via text, sending me a photo of the couple I was to photograph but had never met and a description of what they would be wearing on this exceptional day.

My challenge when undertaking a shoot like this is to be ‘invisible’ until the proposal. Sometimes, I have to hide behind vegetation or whatever is available, and other times, such this, I would hide in plain sight pretending to be a tourist. However, when my wife learned of the location, she volunteered to be my cover. We could pose as a couple sitting in the Adirondack chairs on the Castle Hill’s lawn; this was perfect because it permitted us to get very close to the point where ‘I thought’ that the proposal would take place.

Mags and I sat in the sun, enjoying the view as we awaited the arrival of Jason and Sydney. I set up my camera before the arrive taking a few test shots, I was a bit concerned about the bright sunshine, but it is what it is! I received a text from Jason announcing their arrival. I casually looked around for the couple wearing the clothes described in the ‘text.’ Game on!

Jason and Sydney walked to the lowest row of Adirondack chairs, which was problematic because the drinks from the previous guests had not yet been cleared. Mags and I walked down the lawn to get closer posing as a regular couple with my EOS 1DX and EF 70mm-200mm f/2.8 hidden between us. Jason coaxed Sydney from the chair and they walked to the lower section of the lawn. Jason had previously asked that the Newport Bridge be in the background and so I set the camera up to f/8 – open enough so see the bridge but still able to create a little subject separation. What Jason did not know is that Mags and I were close to them watching every move, awaiting any indication that he would propose. Jason sent me a text, “Ok, over by the chairs and gonna do it now”: I was ready!

What happened next was wonderful, Jason proposed, Sydney was thrilled and surprised, and all the guests erupted in applause.

Proposal photography has many challenging aspects, but it is also pretty damned cool! 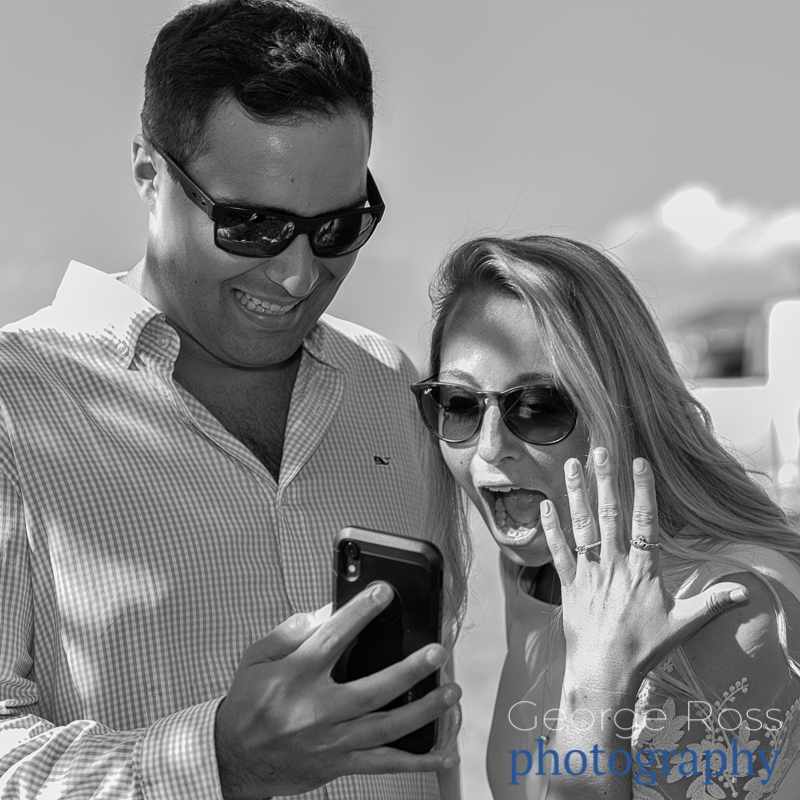 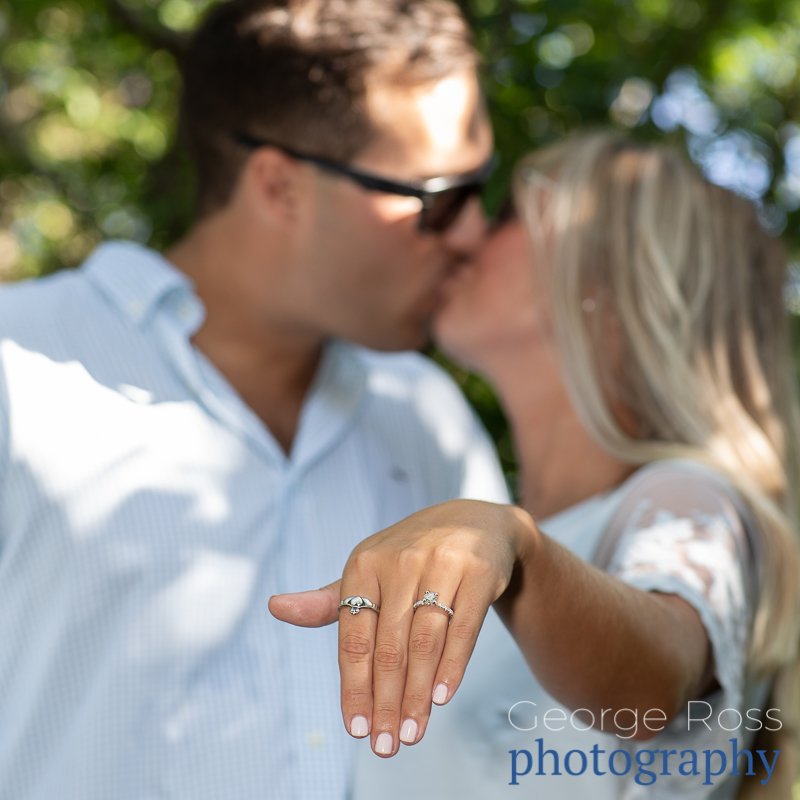 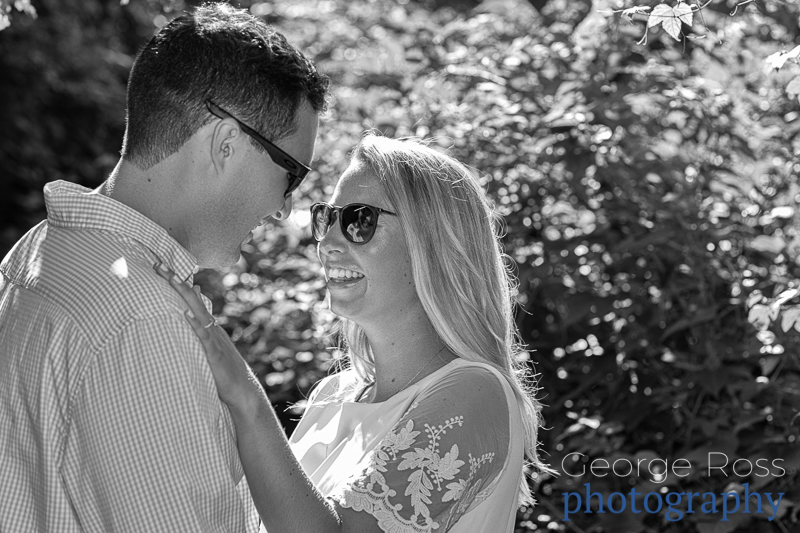 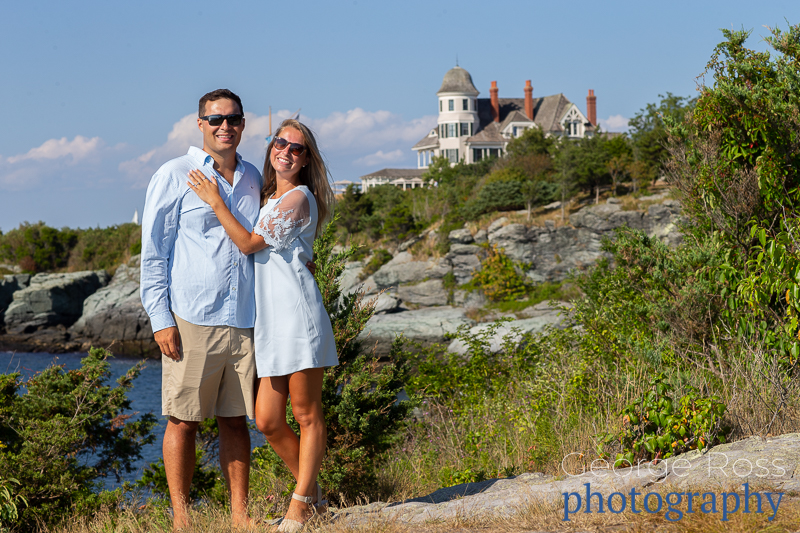 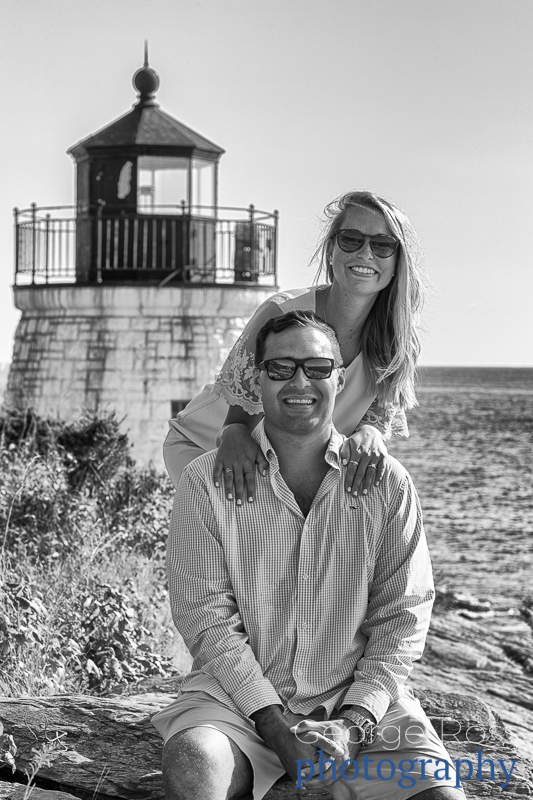 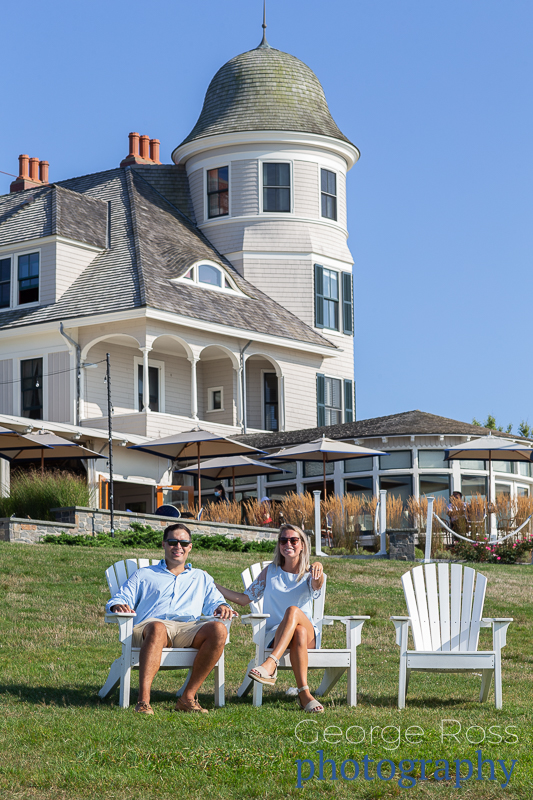