When Ryan first reached out to me on June 28th for a (“short-notice”) shoot on the 29th,  I thought, “oh no, how can we make this spectacular?” Why? Because he initially requested the photoshoot to be on a Newport  beach in the middle of the day. A beach day with the weather forecast to be in the 90s meant no parking availability and bigs crowds on the beach. I did not feel good about this.

I called Ryan, and we had a long chat. The bottom line was that both Kelly and himself were from out-of-state and did not know where a good location would be. I explained my concern about the initial site, and Ryan stated he was entirely open to options. We discussed Newport’s Cliff Walk as a possibility, but when he revealed that they were staying in a pet-friendly Air BnB and had a dog, I had the perfect location for them: Beavertail State Park. Under the guise of taking the dog for a walk in one of Rhode Island’s gems before dinner, it would be the perfect cover for a surprise proposal. A tactic that I had previously used.

When organizing a surprise proposal, the challenge is that one of the three involved parties does not know what is going on; in this case, it was Kelly. And so, while Ryan and I had tentatively organized a shoot for 5 pm on the following day (Tuesday), Kelly had other ideas for the Tuesday holiday activities, with the result that Ryan moved the shoot to Wednesday at noon-time. I pointed out to Ryan that noon-time in summer was photographically speaking not a good time because of the vertical shadows caused by the overhead sun, but it had to be this time, and I said that we would make it work.

Ryan had never been to Beavertail before; therefore, it was my responsibility to guide him to a spot where I would be lurking with my camera. I provided Ryan with a couple of locations on an annotated Google map: plan A and plan B; the final spot would depend on the wind. Beavertail is on an island, and there is a perpetual breeze. Perfect, we had a plan.

However, to make things go smoothly, I informed Ryan that I would arrive 30 minutes early and scope out the lie of the land and text him the best location based on the actual weather conditions. 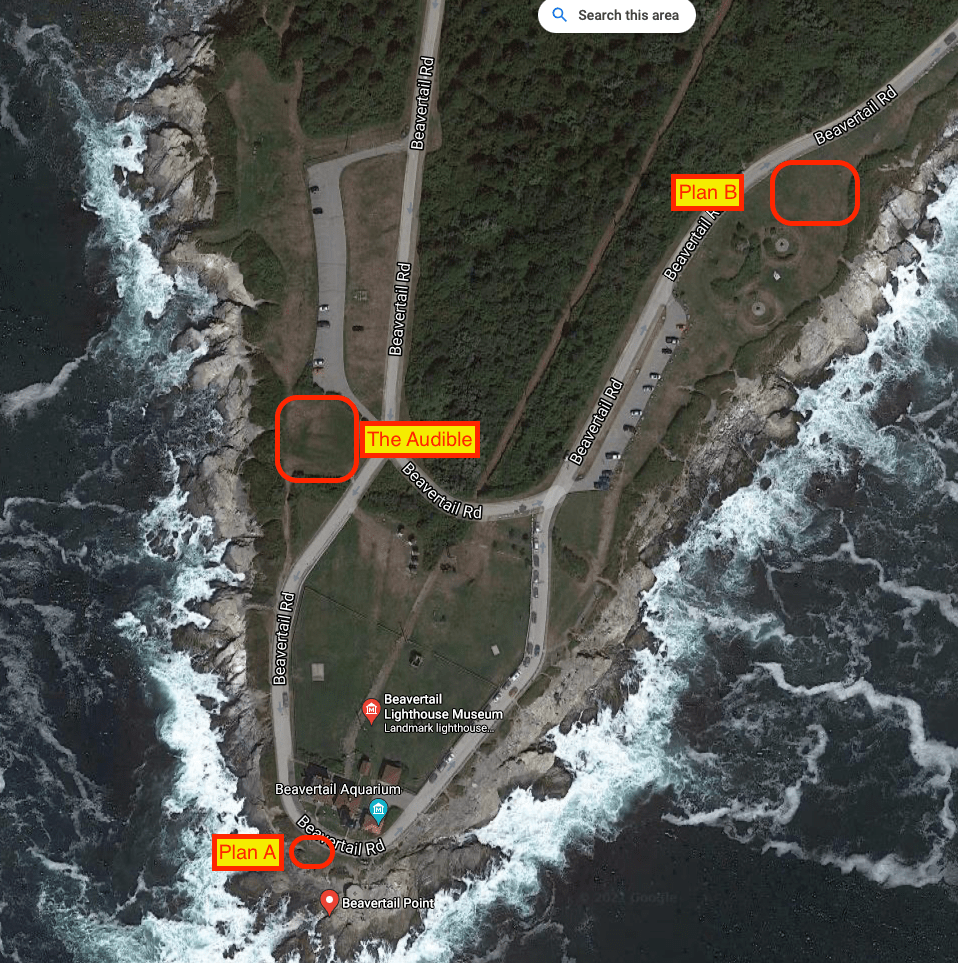 I was a bit nervous about the post-proposal mini-engagement shoot because I knew I could not produce good work in the mid-day sun; I hoped I could find shade.

I was ready to roll at 11 am, but Ryan sent me a text to push it back 30 minutes. And so, I pulled out of my drive at 11:30 am and arrived with little traffic at noon. As I entered Beavertail, I searched for a shady location that I could use post-proposal, and close to the park entrance, I saw a tiny tree with shade; that would be the spot. I parked opposite Lot #2, took a photo of the location of my truck, and instructed Ryan to park beside me.

The conditions at Beavertail were 85-degree temps and a strong breeze out of the South. I had to find a spot on the lea side of the wind. The park was not busy, and I decided to use a beautiful area close to where I had parked, which was protected from the wind. I had to call an audible on the location for the proposal (which often happens on this type of shoot), sorry Ryan! I now had to communicate to Ryan, who had never been to Beavertail where this spot was. I sent him the following sequence of photos.

To the right of my truck, there is a cut-through 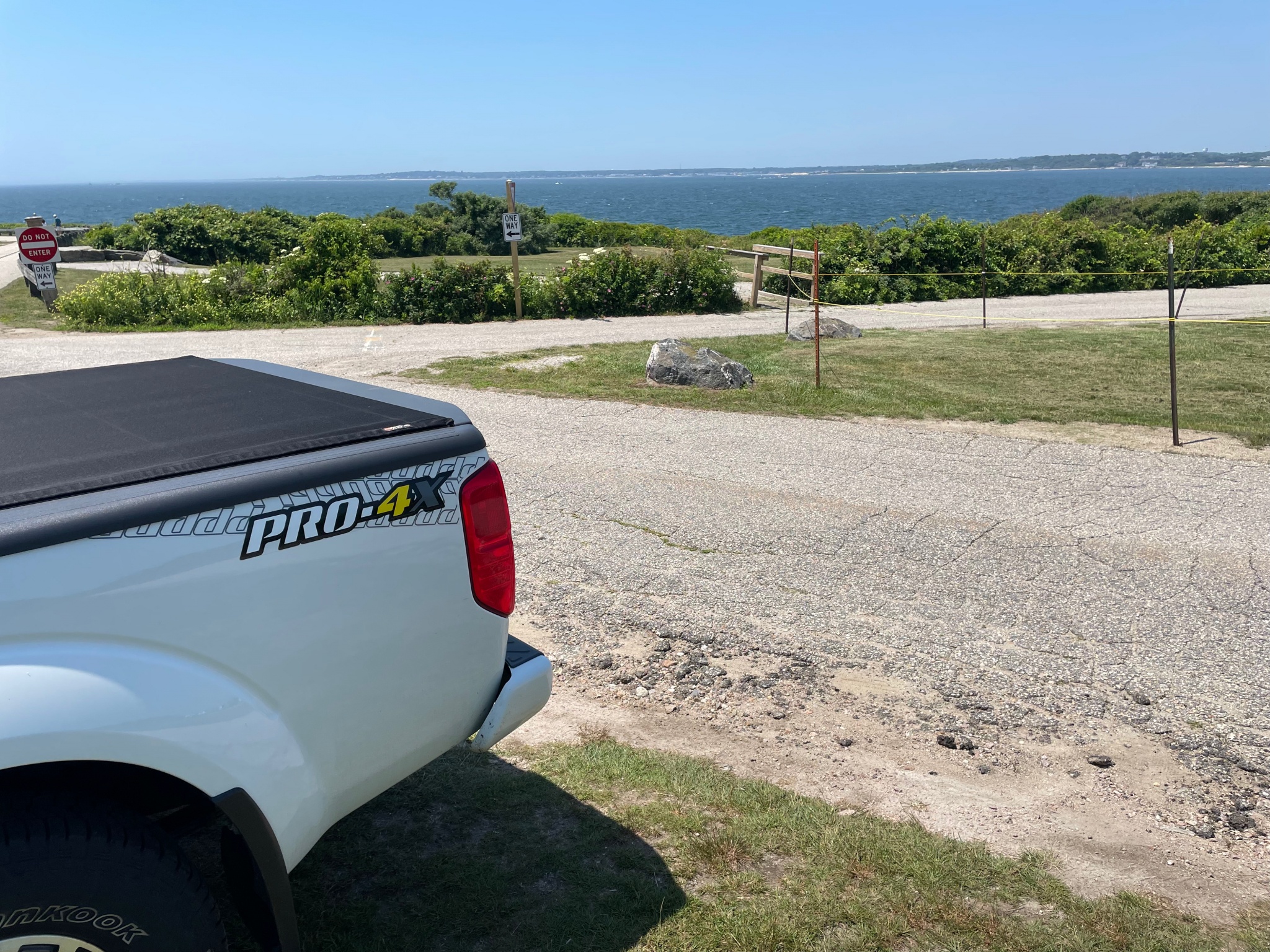 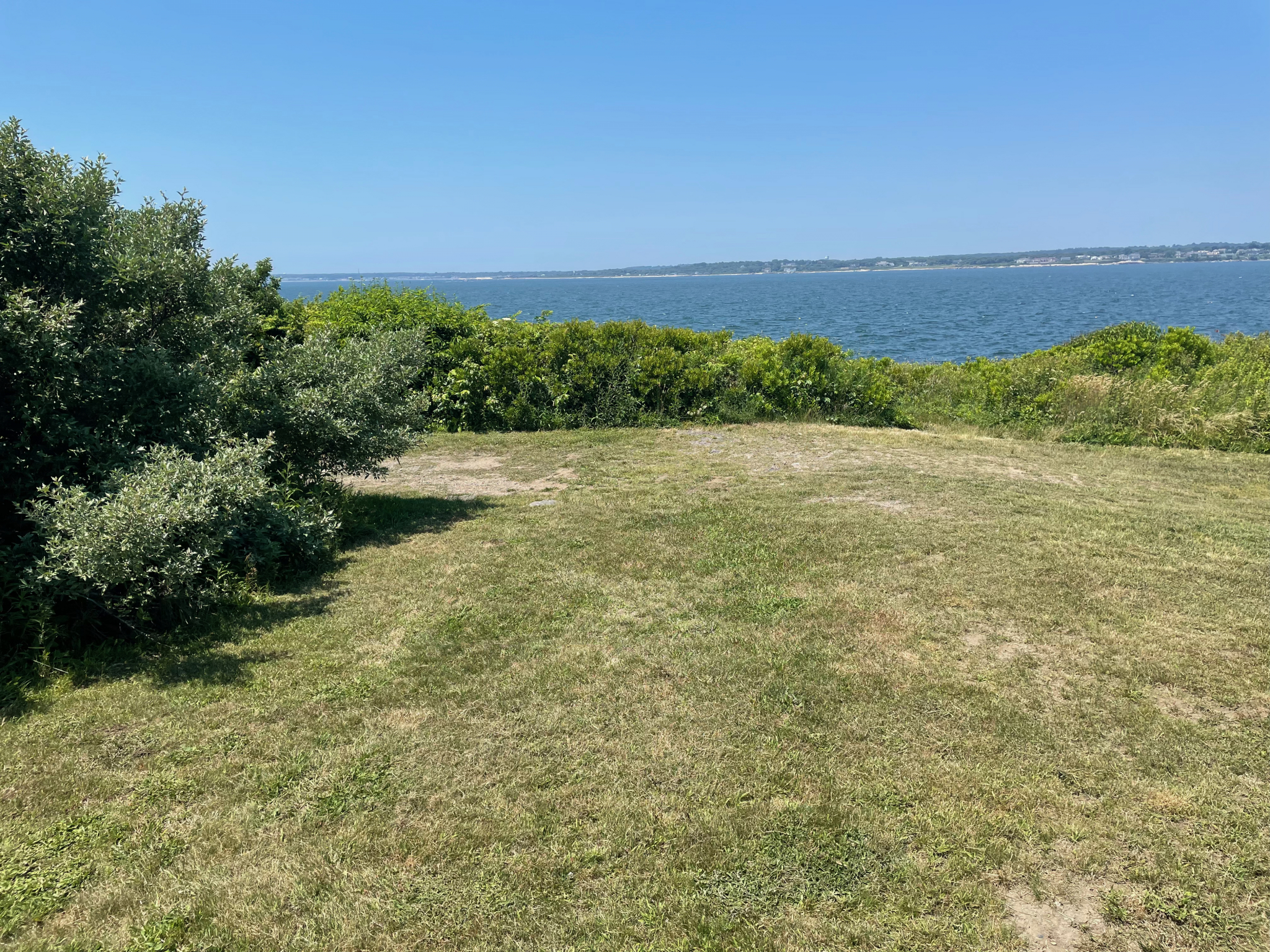 He confirmed that we were good to go and that they were en route.

I took up a position where I could see my truck, and when a car pulled in beside my vehicle, I sprung into action, but it was a false alarm, ugh! I returned to my waiting spot, but then I saw the yellow New York plates. Game on!

I was about 100 yards away but decided to take no chances and hid my camera behind a fence so that I would be a tourist with a backpack looking out over Narragansett Bay. However, I had one eye-tracking their progress. As they made their way to the cut-through, I picked up my camera and ran to my predetermined shoot position. I watched as Ryan, Kelly, and Dewey walked to ‘our spot’ but continued walking. “Oh No,” I ran to the spot where Ryan was supposed to propose and peered around the corner only to see Ryan and Kelly turning around and walking back to the very place where I was now standing. There was no option; I had to turn around and high-tail it out of there and back to my original location.

I had previously taken a couple of test shots, so my camera was ready to go to work. I picked up the Canon EOS 1DX with a 70mm- 200 f/2.8 lens and watched their progress; when Ryan dropped to his knee, I was ready. With a backdrop of Narragansett Bay, it was a perfect location to propose while walking a dog.
After the proposal, we introduced ourselves and informed them of my plan. Let’s take a walk around Beavertail and take a few scenic photos, and then we would drive to the only small tree that would offer some shade for the portrait work.

So, here we were in the beautiful scenic location, and I crammed Ryan and Kelly under this tiny tree to work the shade.

They were both troopers, and I am thankful for the services of tiny-tree. 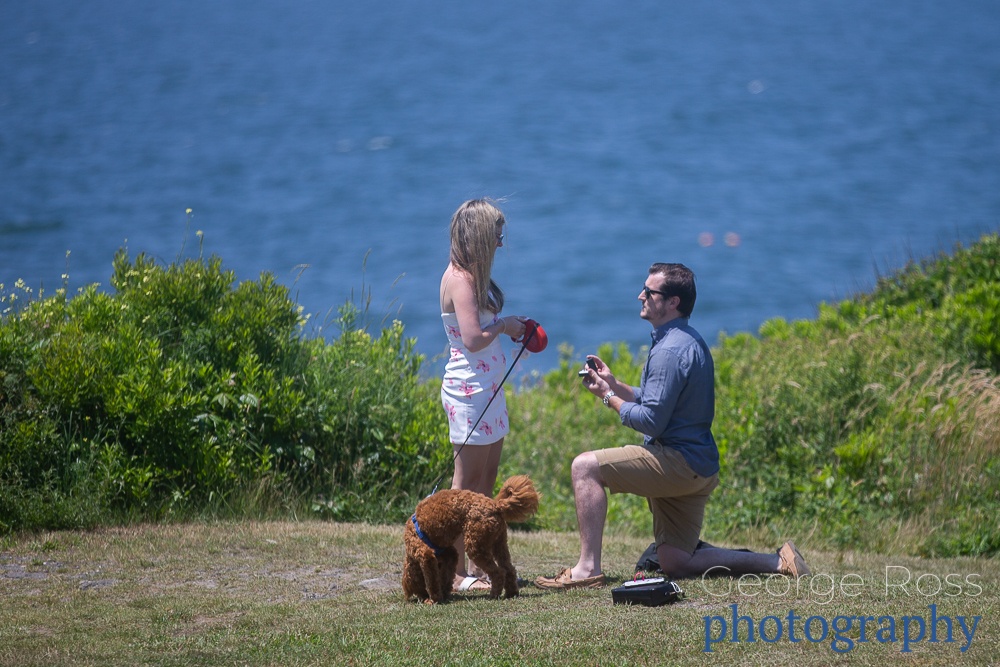 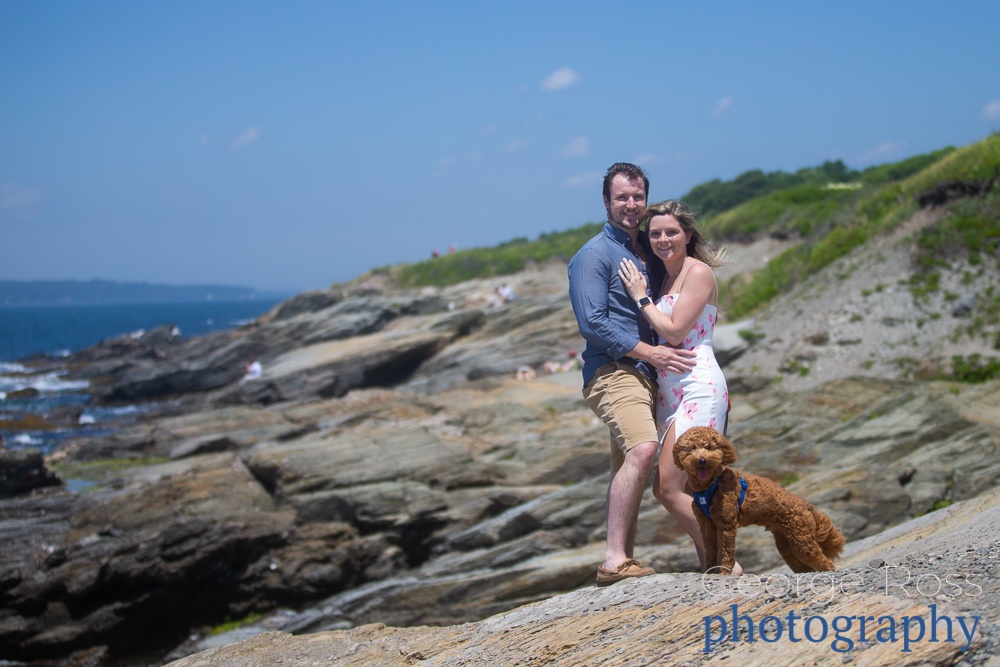