Sometimes You Just Have To Use Multiple Exposures

In many photoshoots, the ‘Laws of Physics’ prevent the desired shot from being achieved with a single press on the shutter release. This does not mean that the desired shot cannot be achieved it simply means that the photographer has to ‘box clever.’ My goal in this photoshoot was to produce a single image which depicted the splendid 20′ long projected display in the conference room while showing the elegance of the room.

The room itself was very dark and while there was a set of windows to the left of the conference table that created much more of a problem than an aid. It was pretty clear that the only way I could shoot this would be by using multiple exposures and creating a composite image. I decided on two images, one to expose the screen and one to expose the room.

To get the highest quality image, I would have to shoot at ISO100 and to create the maximum depth-of-field to ensure that as much of the conference room would be in focus I would have to stop the lens down using a wide-angled lens. Furthermore, I would have to introduce multiple light sources to lighten a very dark room. So, with that in mind, I set to work.

I used three 580EX strobes evenly placed along the left-hand wall and out of view of the framing of each shot. Each strobe was set in manual mode and was set to 3/4 power and was controlled by a Young 622N wireless trigger with a camera mounted 622N-TX controller. I like this trigger set-up and use this same set up to provide lighting control at wedding receptions because the TX controller on the camera permits the adjustment of each strobe’s power and they are very reliable.

I fired the strobes in the first exposure, Frame A below.

My kit bag is full of Canon ‘L’ series lenses with one exception the Sigma 10-20mm, my lens of choice for this project and the focal length was set to a very wide 13mm ( wider than I would have liked).

With a little experimentation, I settle for two exposures 5 seconds (Frame A below) to create a nice image of the screen and 15 seconds (Frame B below) to expose the room the way that I wanted it. My plan was to create a composite image where I would use the projected image from one frame and the room from another.

You can see the final composite image at the bottom of this page. 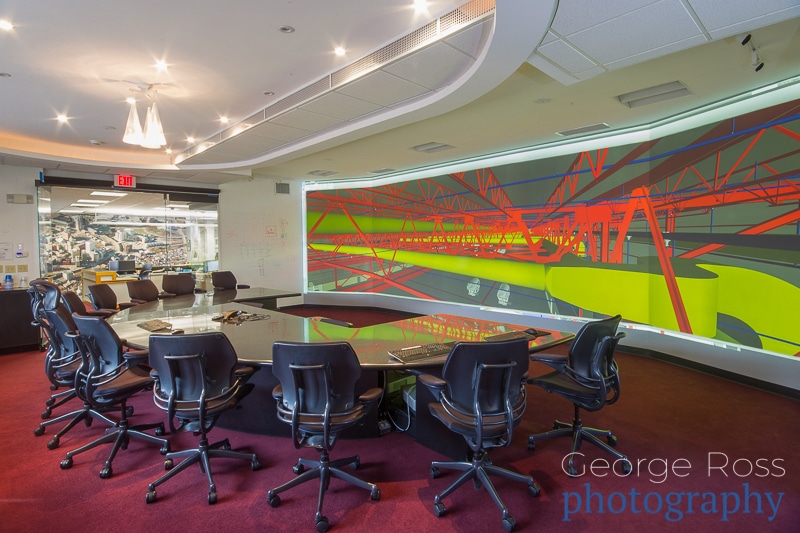